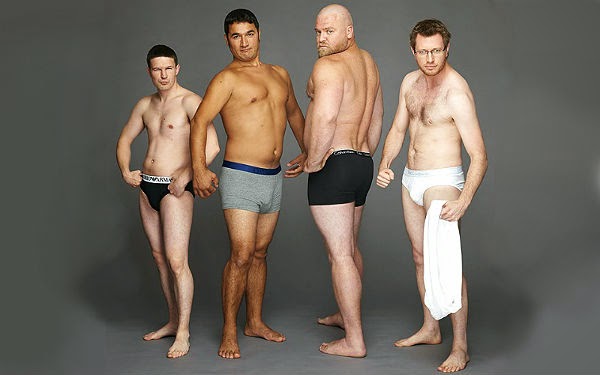 As I waited in an extremely long line at a club in Atlanta a few years ago, I scanned the line ahead of me for people I knew who might get my friends and me closer to the entrance. Also, as I waited, my friends and I became chatty with a few guys waiting in line near us. A guy I barely knew in passing from Washington D.C. walked past us and straight up to the front of the line. As he walked past, I couldn’t help but overhear one the guys behind shriek, “Now, that’s fat!” I swung around. “Are you talking about him? The guy that just walked up to the front?” I asked, butting right into their conversation. “Yes. I was telling my friend that he’s cute but way too fat for me,” he answered. The guy who was “too fat” for him was at most a 36 waist. He was very attractive with a thick, solid, stocky build – just the build that I prefer!  He was by no means “fat,” but while he was perfectly my cup of tea, I realized that as far as slender gay boys with 30-inch waists and European builds (like myself and the guys in line behind me) that day in Atlanta go, an attractive man with an average to thick build was considered “too fat.” But why?
I’ll admit; I like a big, thick man. I like solid, big football player build or even an “average” good old American broad chested, 34-35-36 inch waist man as opposed to a “chubby” guy but I just like a guy bigger than me. I don’t want to share clothes with the guys I date. I have a best friend for that! While I have my own preference, it’s not a preference that is shared by many of my friends. Bigger guys are definitely an acquired taste among gay men. Sure, there are those – like myself – who like them, but most gay men are deeply concerned with being either as thin as a supermodel or as muscular as a bodybuilder. It’s very much a gay-specific concern. Be it healthy or not, most straight men don’t obsess over their weight or physical appearance the way gay men do.
Being a gay man is hard. As such, you’re a minority in society. Inside our own culture or subculture, there are subgroups within a subculture. Being overweight is such a group. Surely being the biggest one in a group of skinny bitches cannot be fun. I’ve never been overweight or plus sized, but I have been bigger than my current 160 pounds before and seen the difference I get in certain attentions now that I’m slimmer. I’ve never worried about my weight either. I belong to no gym, I work out sporadically, and I eat whatever I like and still manage to stay slim. I measure my weight not by a scale but rather by how my favorite jeans fit me at any given time. However, I have friends and associates who struggle with weight and whatever pressures they feel to be thin in a community that places a thin or physically fit physique above all else. Oftentimes, I don’t think they’re overweight at all and prefer almost anyone with a little more meat on their bones. But I do understand that mine is not the typical response.
While I’m sure some overweight gay men do feel like outsiders in clubs and amongst friends, many more than embrace their size and stature. There are groups all over the Internet dedicated to larger gay men and their admirers. Bears, chubs, gainers, cubs, chasers; all have a place. I’ve been accused of being a “chubby chaser” myself, but even the chasers on occasion get shot down by big guys who only want other big guys. Call it reverse size-ism! I guess it only makes sense as the gay community at large is not at all shy about exclaiming “no fats” in personal ads and even certain party invitations as easily as the guy in a club line exclaimed a stranger was ”too fat for him.” Where is one to turn?
Unfortunately vanity and superficiality is so prevalent in our community that even common courtesy and politeness is sometimes ignored. One never really understands why. I think as a gay man you’re just thrown into the ways of the prevailing community. One’s personal beliefs and preferences come out eventually, but the facts still remain be they good or bad. I’m not sure if our emphasis on weight is based on health, or just appearance or even ones ability to fit into European sizes, but a larger gay man definitely faces a different set of circumstances than his more slender or muscular counterparts. Even in jest, it’s an issue. I’m guilty myself. My thinner friends and I call each other names when we fit better in a medium shirt than our usual smalls and when one of us realizes we can’t fit into our size 30 jeans anymore. I myself am a 33 at some European stores, and while I get teased for it, I actually like it! I could use a little more weight. But not too much, though. I like the thick boys but, like I said, I don’t want to share their clothes.
Have you found the right one, or are you still searching?

Previous Post: Getting off Grindr Next Post: Still Hiding in The Closet? 12 Hysterical Ways to “Come Out”