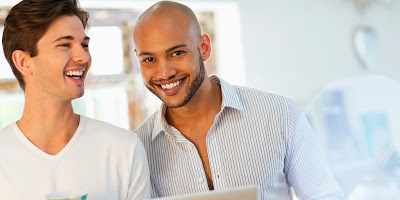 I often get letters from men asking how to go about maintaining a friendship with an ex-partner after they’ve broken up, and this is no easy endeavor. But it is possible! In fact, this scenario is quite commonplace in the gay community.
When some of us feel disengaged or removed from our own biological families, our friendships and lovers become families-of-choice that comprise wonderful additions to our support network of positive attachments and affiliations. They give us a sense of membership and belonging that we oftentimes may not experience within our own lineage.
What follows are some tips on how to go about navigating this tricky relationship alteration:
1. A relationship commemoration ceremony.
Immediately upon making the decision to end your intimate relationship, it’s important to conduct a “life review” of your relationship together to give it a proper sense of closure as you say goodbye to that part of your life together.
Visiting with a trained counselor to help facilitate this is recommended, but you would ultimately want to sit down with each other to talk about things like what initially attracted you to each other, what worked, what didn’t work, ways you were hurt, what you learned from being in the relationship, what you’ll miss and what you won’t, your hopes for each other, express gratitude and forgiveness to each other, and share your goodbyes in your own personal way.
This, or any other form of ending ritual, will help put your relationship in perspective and provides a solid launching pad for starting over.
2. Maintain a period of abstinence.
This is my #1 recommendation because it can be extremely difficult to downshift from “partners for life” to “just friends” immediately after a breakup.
A period of mourning is required to work through your loss before being able to look at your ex in a different light, and this is best accomplished with some time apart with no contact in order to work through those feelings without a lot of distractions and triggers that can come about from seeing each other too soon after parting from your partnership.
Every couple will be different in terms of the length of time needed to achieve this, so you’ll have to monitor your level of readiness as it evolves.

“This is the time to now define a new
lifestyle and identity for yourself.”

3. Ease back into contact.
When you resume contact, go slow! It’s probably best initially to avoid alone time in those special private settings (like your home) and start out by hanging together with other friends in group contexts.
Gradually desensitize one-on-one exposures in private settings and always check in with each other to see how you’re feeling and to discuss any triggers that might get activated.
4. Set clear boundaries.
Set some emotional parameters from the onset in terms of topics of discussion, places to meet and behaviors that would be deemed acceptable vs. off limits to help you in redefining this new relationship with each other.
Revisit these boundaries as time goes by as there will likely come a time when they can be loosened.
5. Live a full life on your own terms.
Now that you’re single again, this is the time to now define a new lifestyle and identity for yourself.
Throw yourself into purposeful activities, begin dating again when you’re ready, hang out with your friends. Avoid spending significant amounts of time with your ex because now is the time for you to begin moving forward and reaching toward your new vision and goals.
Negotiate your time with him so it doesn’t monopolize your energies and sabotage your independence and progression toward what you want out of life next. You’ll be great!
Have you found the right one, or are you still searching?