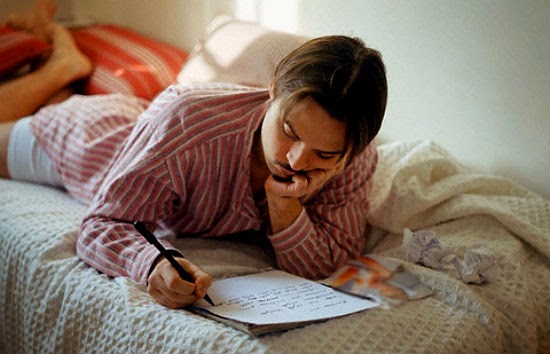 “This isn’t just burnout; we’re being traumatized by what we see on the TV, what we hear in the news.”

For LGBTQ people, claiming space for ourselves and our passions in a cisnormative, heteronormative world is an act of revolution. That’s why Logo is continuing Claiming Space, a roundtable series where we pass the mic to a group of queer people we admire to speak on…well, whatever resonates with them.

Mental health is health, and LGBTQ people know this well. In honor of Mental Health Awareness Month, we asked eight LGBTQ activists, artists, and creatives — from The L Word: Generation Q star Leo Sheng to bestselling author Gaby Dunn — about how they hold space for self-care. Read their answers below.

I’m in a place now where I feel like I want to be on social media less and less, which is kind of counterintuitive to what my job is. I’m off Twitter, which has been actually incredible. I thought it was something that I never would’ve been able to do, but when I stopped using it, over the course of three weeks I felt incredible. I’ve put all these stop-gaps on my phone so I’m not able to go on Instagram or TikTok for a long period of time. My phone stops working at 11pm, and it doesn’t start up until 7am.

I have bipolar disorder, so the big thing for me is impulsiveness and mania, but depression can also make you do things publicly that you wouldn’t necessarily normally do. I’ve had a few instances where because I have a platform, and because I have access to people at any time, I’ve had very public manic episodes, very public depressive episodes. I’m in a place where it used to be good for my career to have access to all of these people, but in the last year, it’s kind of become bad to have that access. So I’ve had to really get back in touch with what my job actually is, which is writing. I’ve had to parse out how much of my job is interacting with people and how much of my job is sitting down and doing the writing, actually completing works of art. And it’s hard because I still compare myself to everyone on Instagram, so that’s the big thing I’m trying to work on now. I have a mental health journal, and I mark down my feelings for the day, which has been really helpful.

I make sure that I focus on the things I like. Especially over the past year, with the pandemic and seeing how some people ignored it, I had to step away from being so involved in social media and paying attention to things as I was. I focused on looking at the things I like. I unfollowed the things that made me sad and followed things that made me happy. Now, my Instagram feed is just, like, dogs and arts and crafts. I follow celebrities who make me happy; I focus on Lady Gaga and Taylor Swift, or people who I know are going to post things that won’t make me mad. That’s what has really gotten me through the last year. I spent the entire year at home with my husband, who luckily can work from home, so I have him. I’ve focused on building our relationship. We’ve been together for a decade, but we’re stronger than we’ve ever been.

For me, self-care has always been escaping into TV, which has been really helpful given my main profession. I love to watch movies and television. I go to IMDB constantly; I read as much about the production as possible. I find that fascinating. Maybe I don’t turn my brain off, but I do use my brain differently in a way that feels less overwhelming. I love to write too. I used to write fanfiction. I don’t do that anymore, but am learning how to write scripts and screenplays, how to strategize around the stories I want to tell and hopefully someday convey.

I really value spending time with my friends. Obviously in a pandemic, it’s a little harder. I’m hopeful that as vaccines continue to roll out and more people continue to get vaccinated, that’ll be a really nice way to refuel with other people. Like many others, isolation has been very challenging for me. I have roommates, and we’re all very, very close, but we still have our own lives. I’m hoping that when we’re able to see people again safely, that will prove to be another form of self-care.

Writer, creator, and producer of Phase 6

I used to allow work to consume me so much that stress-related symptoms sent me to the emergency room. I was forced to make my health a priority. When life gets busy, I no longer feel guilty about taking time to care for myself. Self-care to me means making sleep a priority, taking breaks from social media, and spending more time with people I enjoy. Each week, I set aside time to do things I love, like going to brunch, writing, and riding my bike.

The truth is, I’m still learning to hold that space for myself. It starts by weaving wellness into the different parts of my life, rather than treating it as a discreet and separate thing. It’s leaving a yoga mat on the floor to remind me to stretch. It’s actually taking a break when my dog or cats are demanding my attention. It’s having apps like Inflow and Shine on my phone, prompting me to check in. I try to create pockets of self-care and healing wherever I can. It helps me to remove the barriers that keep me from practicing self-care by making it as simple as possible.

It might sound weird, but lately, one of the important ways I hold space for my mental health is by holding space for all the different parts of myself. I’m an incorrigible perfectionist, so I’m always trying to make order out of chaos — and unfortunately, that habit doesn’t stop at my mental health. No matter how messy and complicated I know humans are, I can fall into this trap of wanting myself to be neat and tidy and consistent and understandable. I want to know which traits are parts of my personality and which are symptoms of my ADHD or depression or trauma. I want to be able to anticipate which defense mechanism will pop out when. I want to be able to explain exactly why I feel a certain way. I want, basically, to be some well-designed machine that may as well come with a user manual. Which, as you can imagine, is an easy way to spend your life feeling broken and frustrated and lost.

So instead of treating myself as a problem I need to solve or a mess I need to organize, I’ve been trying to offer all the different parts of myself — and all the different parts of my contradictory, messy, human mental health — space to exist without analysis and judgment. It’s not as active as some of my go-to self-care, but I’m hoping it leaves more room for self-compassion and growth.

A big thing for me is addressing stigma and shame. As someone who is trans and nonbinary and queer, growing up I was exposed to a lot of queerphobia and transphobia. It was something that was ingrained into the interactions I had with friends and schoolmates; it was in the media; it was everywhere. I internalized so much of it that as I realized that I too was trans and nonbinary, it was a huge struggle for me to accept myself and accept others. Coming out hasn’t always been a smooth journey for me, but through making connections within the community over years of talking about [shame], building relationships, feeling safe enough to be vulnerable with other people, and having a therapist, I was able to build my mental health capacity.

Now during the pandemic, we’ve all been so drained and burnt out and overwhelmed. I talk to people all the time about how this isn’t just burnout; we’re being traumatized by what we see on the TV, what we hear in the news, what is happening to our family members and friends. I think it’s so important that people practice a lot of self-care and community care during these times to maintain our mental health capacity.

There is such a sense of togetherness in our community, even though so many of come from different cycles, different places. For some of us, religion has something to do with our wellness, for some of us not. For some of us, it’s spirituality, it’s a yoga class; there are so many things on the list. But what I love about all of us is our commitment to healing. It really feels like today, because of everything that’s been happening, there’s this commitment to heal some of the stuff that’s been forced into our lives. So one of the ways that I hold space is to watch other people’s content and read other people’s books. It’s this balance between self-care and self-compassion — concentrating on yourself — and getting inspiration, support, and connection from others.

Our emotional health can range from thriving to struggling. No matter what you’re experiencing, there are ways to take action to support yourself and those around you. Learn more at MentalHealthIsHealth.us.

Previous Post: The Vaccine Could Be the Key to Getting More Matches on Dating Apps To Top Next Post: An Out Politician Recounts How He Saved His Gay Neighbor’s Life By Donating His Kidney