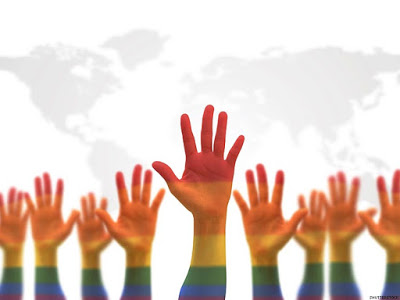 After nearly 50 years of struggling for equality, amid celebration of the arrival of marriage equality in the United States, there was hand-wringing and name-calling. Cries abounded in LGBT quarters that “the movement had prioritized marriage” to the exclusion of all else. There were accusations and recriminations against national organizations that they drove the prioritization or came late to the game and claimed the glory.

As a movement we are a group of diverse, cantankerous, agitating, never-satisfied individuals. When some said we need a leader we balked. Leadership, yes; a leader, no! Some said we were too divided; too many unruly, defiant individuals to follow a single hero/ine. Whatever. We accomplished much, squabbling all the way.

Perhaps this is a moment when we can relent in our unrelenting complaints against ourselves to celebrate our national organizations, our state and city groups, our activists, individuals, couples, families, queer spawn, and allies for what we’ve accomplished together.

Some accused the national organization of coming late to marriage equality, not so — Lambda Legal was involved from the start, in 1993 in Hawaii filing an amicus brief supporting plaintiff couples, and in 1996 as co-counsel in the trial court. The Task Force was involved in fighting same-sex marriage bans state by state since starting in at least 2003, and its Policy Institute contributed critical opposition research. Freedom to Marry was founded to create a funding consortium and strategy base. Equality Federation state members like Mass Equality, Equality California, and Empire State Pride Agenda engaged state by state.

In city after city, individuals and couples stepped up to say, “Enough, don’t ask us to wait.” It was certainly a grassroots effort. But it wasn’t just marriage equality we were fighting for, or continue to fight for.

As a community, we battled a plague — HIV and AIDS — which the government would have refused to address were it not for our efforts. At the national level there was passage of hate-crimes legislation, repeal of “don’t ask, don’t tell,” and LGBT inclusion in the Violence Against Women Act. Antidiscrimination and anti-bullying laws were passed in cities across the country. LGBT families put themselves on the line to gain adoption and parenting rights. “LGBT rights are human rights and human rights are LGBT rights” became official State Department foreign policy, thanks to Hillary Clinton.

We matured to recognize and be a voice on issues of the larger society. We became a force within the immigration reform movement, participating in Black Lives Matter, advancing nondiscrimination on the basis of gender identity, calling for reform of law enforcement policies and prison conditions, health care and economic reform. We entered the fray of local and national electoral politics as voters and candidates.

Issues of gender identity moved from the margins to the center of a national conversation. The role of transgender men and women in advancing civil rights and dignity for all has became a vital part of our movement. Across the country we changed hearts and minds.
No, it’s not like nothing else happened while we were prioritizing marriage equality.