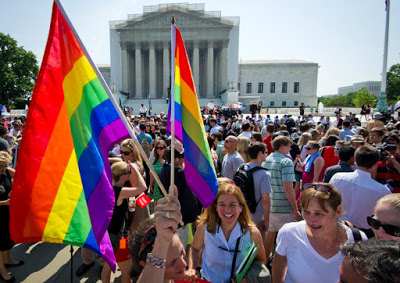 John Bush and Damien Schiff “would cause grave harm” to LGBTQ people and women, reads a new letter to senators.

In a letter to all senators, groups including Lambda Legal and the Human Rights Campaign say both nominees’ views on civil rights “are fundamentally at odds with the notion that LGBT people are entitled to equality, liberty, justice and dignity under the law.”

Bush, a Kentucky lawyer up for a lifetime seat on the 6th U.S. Circuit Court of Appeals, has applauded critics of same-sex marriage and compared abortion to slavery, calling them “the two greatest tragedies in our country.” Schiff, an attorney up for a 15-year seat on the U.S. Court of Federal Claims, has said LGBTQ anti-bullying efforts are akin to “teaching ‘gayness’ in schools,” and argued that states should be allowed to criminalize “consensual sodomy.”

“Although neither Mr. Bush nor Mr. Schiff has any judicial experience, their public statements and writings have repeatedly demonstrated not only an extraordinary lack of judgment but also plain contempt for the rights of LGBT Americans, people living with HIV, women, and other vulnerable populations,” reads the letter, which goes into specifics on each count.

Previous Post: Make Your Love Last: 7 Tips for a Strong Relationship Next Post: Domestic Violence: It Happens in Gay Relationships Too