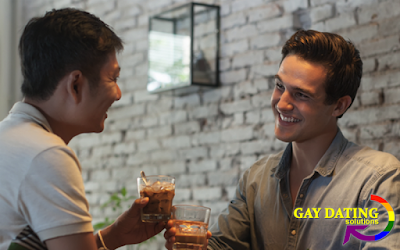 Singles looking to mingle are increasingly crossing cultures to find their perfect partners. After all, love is love, right?

You may be from one culture and your potential boyfriend is from another. If your gay dating pool feels too small, it’s time to widen it. The fastest way to do that is by meeting people of different backgrounds. Gay dating can be awkward enough already when dating men from your culture so you can definitely expect awkward moments when bridging ethnicities. Take it all in stride and focus on seeing whether your values align, and you feel compatible and positive when you’re together.

Do Date The Person, Not The Race.
Race is not a part of you getting to know each other. There’s no need to dwell on it as a topic before you even get to know each other. You can address it but then move on. We are all much more than the color of skin we were born with. Discuss your dreams and aspirations, share your story, and get to know who you are, heart-to-heart.

Share, Don’t Compare.
One of the greatest joys of interracial dating is the opportunity to share cultural experiences with one another. Celebrate your differences and be intentional about sharing the foods, music, holidays and traditions you’ve grown up with. Talk about your childhoods and how you envision your culture playing into your future. If the relationship gets serious, how will you ensure that both backgrounds are honored?
Be sure to avoid comparisons that will leave one person’s family or culture looking less significant than the other. And don’t expect your ties to your family to be as weak or strong as your partner’s.
Be considerate as you learn about one another. Ask thoughtful questions, avoid jumping to conclusions, and be willing to have difficult conversations when cultures clash.

Don’t Date Fetishists.
If anyone approaches you saying, “it has always been my fantasy to date someone like you,” they are just seeking to experiment. You deserve more than being someone’s trial run. There is a difference between someone who has never dated interracially but is interested in you, and someone just looking to experiment.
You also don’t want anyone who is dating you to make a statement. The same goes for you. You’re in a relationship, not a statement.

If You Don’t Believe Racism Exists, Don’t Date Interracially.
While confined to the realms of “Whiteness,” a person can remain ignorant to the experiences of racism that constantly leave people of color feeling diminished and undervalued. This can sometimes translate into a lack of even awareness that racism exists and is experienced by others. A romantic relationship is supposed to provide a safe space for individuals to express their feelings and come to terms with their life experiences. For people of color who live in a White-dominated country, many of those experiences will be plagued by racism. A significant other who dismisses or trivializes those realities could never provide adequate support for their non-White partner in relationship. So, if you’re someone who believes we live in a post-racial society because we had a Black president, you probably won’t be the best long-term partner for a person of color.

Prove Them Wrong.
Silence your critics with love. Maybe the skeptics around you haven’t seen a beautiful, healthy, thriving interracial relationship. Treat each other well — and each other’s families well — and set an example of grace as family and friends slowly warm up to you and your partner.

Race, culture, customs and traditions play a very significant role in a relationship but with proper behavior, it wouldn’t be that complex to relate and adapt to it. But prior to dating someone of different race, consider the pros and cons of interracial dating. Make sure you are knowledgeable about his/her culture and that you are ready to overcome any challenges both emotionally and mentally.