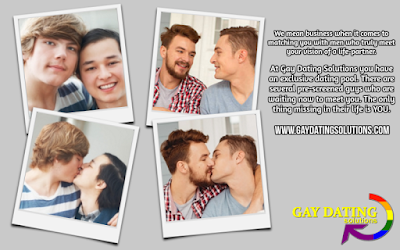 Mention the word “soulmate” to a group of people and you’re bound to get a few eye rolls. The idea that there’s one magical person for you who you’ll fall in love with instantly and never disagree with is just not realistic.
Often soulmates appear in disguise. You might not be physically attracted to each other when you first meet, but there is a mysterious force pushing you forward that tells you this is “the right one” for you.
Although most people think of a soulmate as a perfect harmonious union of bliss, your true spiritual soulmate is the person who is intended to help you “complete yourself.”

For those of you struggling to find “the one”, here’s help…

Be clear about what you want

Most gay men have an idea of what they want based on past relationships. The key is to find the positive aspects you want in a soulmate, rather than the negative aspects. This can be difficult, but possible. Focus on the good things you want in a significant other, and this can help you in your search of how to find your soulmate.

Be your own self

You need to take the time to be the person you want to be, which does mean eliminating or at least dealing with the weaknesses you may have. If you are constantly focused on your own weaknesses, you will attract someone who has the same weaknesses. A relationship that is based on weaknesses rather than positives will die out quickly and not be fulfilling for either person. If you take the time to find yourself and be yourself, you will have better knowledge of what you want in a soulmate, and will be better equipped to deal with a relationship.

You know each other’s flaws and the benefits in them

Yes, it’s true. Our flaws have benefits. Every trait has a positive as well as a negative side. It’s the task of each person to always look for the good, even when things don’t look so good. There is usually a benefit to each flaw. Stubborn people are good decision makers. Overly organized people are great at paying bills on time.
Get out

If you are looking for your soulmate, then you are going to get yourself out there, which does mean meeting new people and participating in dates. This means that you should ask your friends or relatives if they have someone that they think may be a good match for you. In addition, attend various social functions and events you are interested in, as this could be a good way to meet someone who has the same interests.

You’ll know when you’ve met “the one”
Something deep inside tells you this is the perfect one for you. It’s as if there is a spiritual force pushing you to let go of everything you previously expected and to give of yourself completely.

Be ready to be surprised

When looking at how to find your soulmate, be sure that you are ready for surprises. Chances are, you are not going to see someone and automatically think that they are love at first sight. Instead, you should be ready to be surprised. You should also be prepared to fight for any relationship that you are going to have, even with your soulmate there are going to be times in which you have to work for it.

Previous Post: Open Relationship or Monogamy: How Gay Couples Can Decide What’s Right for Them Next Post: In Praise of The Gay Daddy