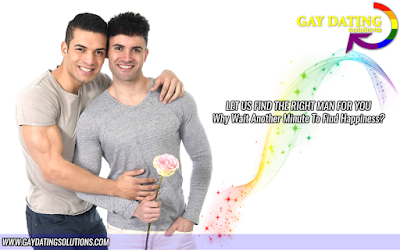 Being gay adds another level of complexity to the dating process, and because we’re all men, we make this process of looking for a mate all the more difficult.

You might imagine that dating a new guy will be a lot like starring in your very own gay romantic comedy: you’ll be asked out in some quirky yet perfect way, your date will clearly express interest in you and be a master of seduction, and when you finally have sex, it will be like the 4th of July in your pants and Christmas in your heart (or Hanukkah, whatevs). Well, WAKE UP, DAYDREAM BELIEVER.

The Stare and Glare:

This is probably my favourite technique used by gay men to signal that they have an interest in you.
The stare and glare technique is most often used at bars and on dance floors.  Generally speaking, there is usually a ‘considerable’ amount of distance between the staring individual, and the man he is staring at.
In my dating experience, I have found that gay men will sometimes move closer to you after an affirmative mutual glare so that they can have another affirmative interaction before actually making a full-fledged move.  This final and more affirmative response may be a nudge, a smile, a quick dance, or another mutual glare. On a funnier note, sometimes the stare and glare goes horribly wrong and you attract attention from the wrong man! Other times you are the recipient of a stare from a man who resembles a deer caught in headlights, which makes for an uncomfortable yet funny scenario.

The Bump and Grind:

The bump and grind technique is sometimes a fool proof way to make a move on the man you are interested in.
I have turned around and began grinding with the men bumping into me, and other times men have had no interest in turning around to dance with me.  I would say, though, that this is the least intrusive way to approach someone at the gay bar, and the one way with the least amount of personal consequences if things do not pan out in your favour.  If someone doesn’t want to acknowledge your casual dancing advances, no matter, as you’re surrounded with your friends and can continue dancing the night away!

The fag-hag is a gay man’s female friend who accompanies him to the gay bar, and who often times does his preliminary sexual bidding.
The fag-hag will act as the gay man’s agent – if a gay man is interested in someone, he will tell his fag-hag and they will discuss. Is he cute enough? Do I have a chance with him? Etc. The fag-hag will boost her male friend’s confidence in regards to scoring this hot man, and then will approach the man in question.
The fag-hags from each respective gay male will discuss the potential for their friends to meet, and then will pitch the idea to their home base. The gay men are uninvolved in the deal until they decide to either accept or decline the proposed meeting.

Peacocking is a tactic that can be used by a gay man when he wants to grab the attention of another gay man, or a large group of gay men.
When a gay man wants to court another gay man, he can flaunt his assets in order to grab the other’s attention.
Peacocking is not new, nor is it limited to the gay scene…. It is quite common in the hetero bar scene as well. Gay peacocking, though, can be quite hilarious since it is most often times an over-the-top display of twerking, grinding and bend-and-snapping.

I have been the victim of the secret pinch far too many times since first coming out five years ago. The secret pinch is very straightforward: if you find someone attractive, you wait for an opportune moment to pitch their ass, and then quickly look away so as to avoid their curious reaction. Some men are bold enough to look you straight in the eye after pinching your ass.  It’s fine. It’s a direct way to grab someone’s attention, but at least be upfront about it – don’t look away! That’s lame.
Have you found the right one, or are you still searching?

Previous Post: How A Wild Night On An African Safari Convinced This Cute College Swimmer to Come Out Next Post: New #LoveOverBias Winter Olympics Ad Spotlights Moms of LGBT Youth