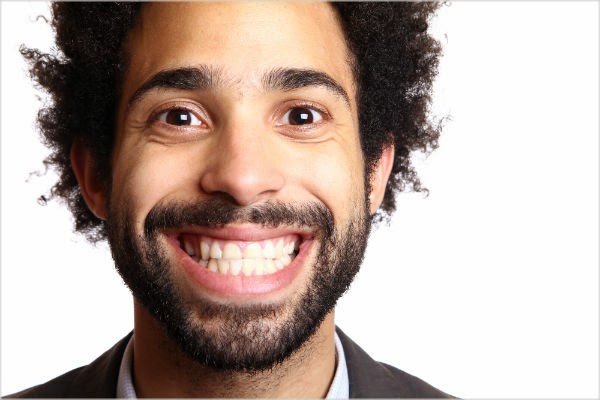 “I might be smiling on the outside, but deep down I’m a cold-hearted BITCH”

Resting Bitch Face is a deeply rooted issue in the gay community. The men who suffer from RBF are often left at the mercy of other people’s judgments and seldom do they go by unseen. But there’s another epidemic slipping by our noses. It’s a condition where no matter how you’re feeling, what you’re going through, or how many ways your envisioning your boss’s homicide, the world assumes you’re as happy as a goat. It’s called Resting Nice Face (RNF) and it’s the most conniving of facial conditions.
A coworker of mine approached me the other day and asked why I smiled so much. I didn’t even realize I was doing it, in fact, I was actually thinking about something pretty dark at the time. But then she asked something unexpected: “What’s your secret… Lithium? Xanex?” As if a person needs drugs for their natural face to perk up. Trust me, as a sufferer of RNF you’re always going to get the short end of the stick, not to mention, you’ll be assumes as having some kind of hidden agenda.
The world hates people who smile 24/7. It’s creepy, and I say that as someone who does it. It’s not normal for humans to have RNF – this is why we have facial expressions in the first place, to change it up. People with RNF are truly a phenomenon, but most of the time we’re the ones who carry the most assumptions. People think we’re naïve, we’re always going to do the right thing, we’ll listen to their problems, or even worse, that we like children. A smile doesn’t express happiness anymore. It conveys a subliminal message that we are the “nice guy,” so we can therefore be available at their beck and call – wrong!
When most gay guys first come out, there is a glow about them – a light, if you will – that overpowers a room. Years of suppression are released from our shoulders and we finally are free to be ourselves. It’s fabulous. This, in my opinion, is where my RNF began to blossom. I was genuinely happy because there were no more secrets, no more excuses for not bringing my self to another human being. I wasn’t faking it, but over time, my RNF started following me. I became known as the “cheerful” guy, the one that people always had to meet on a higher energy level, but also the one who was most fragile – this was anything but true. Little did they know, deep down I was a cold-hearted bitch.
I guess this is where Resting Nice Face can be your best friend. Most people find it hard to deliver a genuine smile, especially when they’re not used to doing it all the time. I can’t tell you how many times I’ve seen someone try to appear happy but fail miserably – their smile looks fake, unauthentic, and super cheesy. Guys with RNF know it’s crystal clear on the outside that we’re seemingly listening and embracing you, but the truth of the matter is we’re very, very excellent fakers. We know we can hide behind our RNF because it’s saved us from potentially dangerous encounters. Don’t underestimate us.
I know it might seem like I’m painting a brush among the RNF community, but trust me when I say I’m not. People who go their entire lives having people think they’re happy go lucky are welcomed with a tremendous amount of pressure to be cheerful all the time. We’re human just like everyone else, and yes, we suffer with sadness and depression too. Though it might not be as obvious, we’re also in need of connection. Not everyone with RNF takes advantage of their frozen smile, but it is something we use to our benefit – you’d be an idiot not to.
There’s something we all can learn from the smiling faces you see on the street. If they inspire you to feel a little joy, even for a second, you know there was a purpose behind their visit. The fact that they might not even be happy or present becomes unimportant. What would the world be without RNF? Hell, I wouldn’t want to know.
If you’re suffering from Resting Nice Face, you are not alone. Stop living in denial that your pearly whites are unconsciously out in the open, and embrace it. Trust me, it’s better to be the smile in a crowd of frowns than anything else, but I’m sure you know that already. SMILE & NEVER APOLOGIZE FOR IT.
Have you found the right one, or are you still searching?