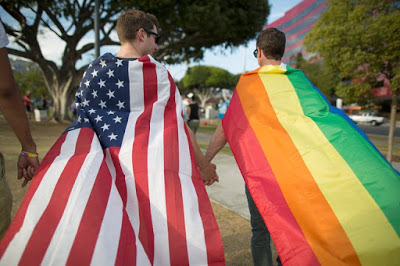 In the early 2000s, when I was a middle schooler in Florida, I was subjected to a trauma that was meant to erase my existence as a newly out bisexual. My parents were Southern Baptist missionaries who believed the dangerous and discredited practice of conversion therapy could “cure” my sexuality.

I sat on a couch over two years and endured emotionally painful sessions with a counselor. I was told that my faith community rejected my sexuality; that I was the abomination we had heard about in Sunday school; that I was the only gay person in the world; that it was inevitable I would get H.I.V. and AIDS.

But it didn’t stop with these hurtful talk-therapy sessions. The therapist ordered me bound to a table to have ice, heat and electricity applied to my body. I was forced to watch clips on a television of gay men holding hands, hugging and having sex. I was supposed to associate those images with the pain I was feeling to once and for all turn into a straight boy. In the end it didn’t work. But I would say that it did, just to make the pain go away.

I have begun to repair the damage that conversion therapy caused me and my family. But the failed promise of change has very likely caused a permanent tear in our relationship.

Many think that conversion therapy — the snake oil idea that you can forcibly change someone’s sexual orientation or gender identity — is an artifact of the past, a medieval torture practice. But in fact it is still legal in 41 states, including so-called progressive ones like New York and Massachusetts. New York City fully banned the practice only last month.

Today I am proudly bisexual and gender fluid, and I serve as the head of advocacy and government affairs for the Trevor Project, the world’s largest suicide prevention and crisis intervention organization for L.G.B.T.Q. youth. We constantly hear from survivors of conversion therapy who have been so hurt that they are contemplating suicide. So we know the scope of the problem.

A new report tells us just how huge it is. Nearly 700,000 adults in the country have received conversion therapy at some point, including about 350,000 who received the treatment as adolescents, according to a study by the Williams Institute, a think tank on sexual orientation and gender identity law and public policy at U.C.L.A.

It is heartbreaking that the study estimates that 20,000 L.G.B.T.Q. teens will receive conversion therapy from a health care professional before they turn 18. An even larger number of youth, an estimated 57,000 teenagers, will receive the treatment from a religious or spiritual adviser before adulthood.

The practice can be performed by a licensed therapist in an office, in a correctional-style campground, by a parent continuously punishing a child for acting too feminine or by a pastor who wants to pray the gay away. The trauma of conversion therapy can cause depression, suicidal ideation, family rejection and a whole host of horrors that children must then face without the knowledge that mental health professionals are supposed to help rather than harm.

That’s why we are leading a campaign to pass legislation to ban conversion therapy in every state. Working with partners across the country — in particular the National Center for Lesbian Rights and the Human Rights Campaign — we’ve made significant progress. Nine states, the District of Columbia and 32 localities have laws protecting kids under the age of 18 from receiving conversion therapy from licensed health care professionals. The Williams Institute study shows that 6,000 teenagers would have undergone treatment before they reached 18 if their state had not banned the practice.

In the past couple of weeks, Virginia, Washington, Arizona and Missouri have introduced bills to ban conversion therapy. But there are still challenges in stopping this barbaric practice. In fact, New Hampshire recently rejected an effort to protect L.G.B.T.Q. youth from conversion therapy with a close vote in the Legislature, being swayed in favor of allowing the practice to continue; many legislators falsely believe that no such practice could exist. The new data from the Williams Institute shows just how wrong they are.

I vividly remember calling the Trevor Project a decade ago as a young college student who was just realizing that the trauma of conversion therapy had devastated my ability to cope with the myriad challenges L.G.B.T.Q. youth must survive on a daily basis. I now hear similar stories of calls just like mine.

We must pass legislation to stop licensed therapists who seek to harm L.G.B.T.Q. youth with conversion therapy. Everyone should know that you can’t change what you never chose.

Read more at: New York Times.
Have you found the right one, or are you still searching?

Previous Post: Watch Troye Sivan Perform ‘My My My’ & ‘The Good Side’ On Saturday Night Live Next Post: TV is Getting Its First-Ever Series About a Deaf Gay Man Played By a Sexy Deaf Gay Actor