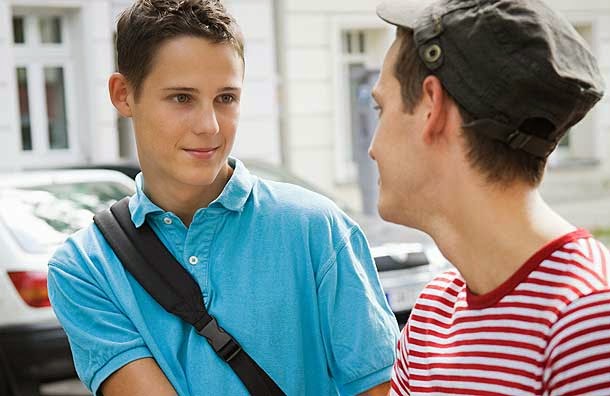 I have dated party boys, ivy-league boys, model boys, even just plain… boys.  But when it comes to “like,” I have a plethora of experiences. For many single gay men, finding love is like chasing a dream. It’s hard to confuse love with sexual tension or even a really heavy amount of “like.” The difference between like and love is a murky one. It’s like asking someone if their cup of tea is sweet enough. How do you know it’s sweet enough? How does one truly know? Who defines “enough” of anything?
I used to think that love was merely a result of a whole lot of like, but as I’ve gotten older I’m starting to realize it’s anything but. Lots of gay men fantasize about love. More often than not it includes marriage, kids, and a golden retriever. It’s this image we crave, but little do we realize the long term efforts we must put into it. Love is a commitment. It takes more than just liking someone. It’s the willingness to change the course of your life.
My grandparents, for example, have been together over fifty years. On Christmas day I asked my grandmother what her definition of love was, and you know what she said? “A decision.” It was then I realized that love is more than just a feeling. It’s the decision of devoting yourself to a man every single day, through the good and bad, even when you don’t like them at times. In order to make this kind of decision, it needs to be with a person who is worth everything you have to offer.
Liking someone takes a hell of a lot less effort than love. I’m very much “in like” with this hunky Australian barista at my favorite coffee shop, but I’m also “in like” with my personal trainer. “Liking” is secondary to love, but that’s not to say it isn’t essential to it. In fact, it’s the building block towards love. For some it’s a quick journey, but for many it’s a slow process. Because being “in like” is so available, it’s also fickle. It’s easy to say goodbye to someone you like. Why? Because you believe there are others out there who are better.
Love isn’t fickle. It’s choosing to be with someone despite their baggage, morning breath, bad cooking skills, bed head and all, and still devoting your time. It’s acceptance, understanding, patience, friendship and above all, trust. Trusting that your partner will never leave you no matter what happens is the most basic foundation of commitment.
There are always going to be guys who are more attractive, even more compatible, than he might be. This is the real difference between like and love. If other men have the power to sway you away, chances are, you were never in love in the first place. Temptation is always going to be there, but those who’ve made the choice of “love” have made a commitment, not just a feeling. That commitment is psychologically tied to a subliminal attachment called LOVE.
When you really like someone, it’s easy to think it has the potential to grow into love. But one of the most important things everyone needs to understand is that true love takes time. True like doesn’t. Never be scared to like someone because you’re scared of love. Liking is supposed to be fun because it’s fickle. If you’ve never had that experience before it will be much harder to recognize love when it finally arrives.
So gay guys, “like” your little heart away! Trust me. When you meet someone worthy of love, you will finally have something to compare it to. That’s when you will be able to tell the difference to understand that this guy is different from all the rest.
Have you found the right one, or are you still searching?

Previous Post: 5 Thought-Provoking Questions To Ask Yourself Daily Next Post: How to Differentiate Between Love and Friendship