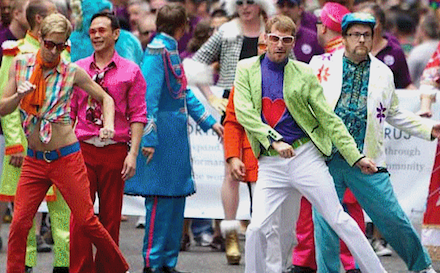 Dallas, home to the nation’s sixth-largest LGBTQ population, is bursting with bars, restaurants and neighborhoods that celebrate diversity. The Oak Lawn area, at the center of the LGBTQ community, is worth a trip all on its own. It is a safe place and a home for many in the LGBTQ community. The Oak Lawn neighborhood in Dallas became the center for the North Texas LGBTQ community in the early 70s and quickly surrounded itself with bars, businesses, restaurants and retail that show their support too.

Sure, I’ve witnessed first-hand the changes Oak Lawn and the surrounding areas have gone through over the years, but at its core, much has stayed the same. Due to a variety of factors, the number of bars and other LGBTQ+ businesses have decreased. Rent increases, the pandemic, internet dating sites, and smartphone apps have all played a role, but we can’t discount the fact that we’re now able to be our authentic selves almost anywhere in town, thereby reducing the need for exclusively queer spaces. But that doesn’t make places owned by queer people and our allies any less important. Visiting Oak Lawn this past weekend for Dallas Pride, it was abundantly clear by the thousands of people packed into bars, restaurants, shops, and streets that we still need a central meeting place where we feel safe, respected, and loved. So whether you’re a lifelong resident, new to town, or planning an upcoming visit to Big D, here are the fab places you need to go, not only during June but throughout the entire rainbow-hued year.

After dinner, walk off your meal and head to Happiest Hour in Uptown. It’s the largest outdoor patio bar in Dallas, with rooftop views that are too good to miss. Order the Dallasite cocktail to sip on while you overlook the skyline.

Make it a night to remember in Oak Lawn, the heart of the Dallas LBGT community and nightlife for more than three decades. Get your boots scooting with dance lessons at the Round-Up Saloon, boasting the best-looking cowboys for 34 years. Ready for round two? Join the rollicking dance party and drag shows at Dallas Woody’s or enjoy live music at Sue Ellen’s.

Many of these bars are located in Dallas’ famous “gayborhood” Oak Lawn, but you’ll also find more off-the-beaten-path options. Visit The Hidden Door, The Tin Room, Alexandre’s, Station 4, The Grapevine Bar, and Kaliente.

One of the crown jewels of the Dallas queer community has long been Resource Center, which goes above and beyond your average YMCA-style neighborhood drop-in. The main building itself is architecturally impactful, built from the ground up to address the many diverse needs of LGBTQ+ people. With services tailored to everyone from youth to senior citizens, a variety of programs zero in on subgroups within the larger community, and local organizations can rent out space for meetings and other events, too. To learn more about all they do—not to mention how you can get involved—sign up for one of their popular Get Centered tours.

Make sure to download dating apps like Grindr, Scruff or Tinder if you’re planning to meet some hot guys over Pride weekend in Dallas. Or try newer premier gay dating sites like Gay Dating Solutions and My Gay Match.