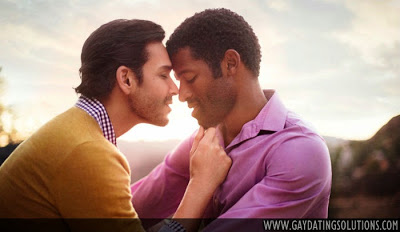 “What’s your secret?”
It’s a question young couples and single guys often ask men who are in long-term relationships. On the surface, this seems odd. It’s not as if gay elders passed down sage wisdom to these men during their youth. Nor do they go to sleep at night thinking about how they overcame the daily trials in their relationships; they’re just living their lives the best way they know how, and in the process years have passed by.
But there is something to be said for the lessons they’ve learned over the years. Whether it be happy accidents or mistakes requiring apologies, long-term couples do have experience and lessons that they can pass along. So we asked a few about their “secrets to success.”
Seph and Mickey — 8 years
Mickey: One of the reasons we get along so well is that we have similar values and belief systems. It’s why my parents are still together. You’re always going to be two different people, and that’s a good thing because it keeps your relationship moving forward. But as long as you have similar values and beliefs then you’ll always find common ground.
Seph: And we never fight over money or sex.
Mickey: Life can sometimes throw crap at you, and your husband should be there to help you through it. You should always have each other’s backs and not fight over the petty things. And if you do mess up, apologize.
Jose and Karlito — 10 years
Jose: We always have sex before going out. That way we’re relaxed, the pressure to finish our night and get home is lifted, and if one of us is too tired to hook up later there’s no bad feelings.
Karlito: We also talk. A lot. So if Jose is snipping at me I’ll ask him what’s wrong, because I know that’s not who he really is.
Jose: How we talk is also important. We don’t use sarcasm or cut one another down. We talk directly, and we do it knowing that our end goal is to get both of us back to that good place, where we’re laughing and joking and enjoying each other’s company.
Josh and David—11 years
David: Never bring up your partner’s faults. You won’t “win” any arguments by doing it. The best thing you can do is always look to the good in him and lift that up. That compassion will get you a lot further.
Paul and Javier—15 years
Javier: Don’t open a relationship until you’ve been together a long time. You really need to know one another. Set strong ground rules. If you suspect it will tear you apart, don’t do it. Talk constantly about it to make sure you’re both cool. If you do it and don’t like it, then quit and don’t go back. Flings are one thing, but your partner is for life. Respect him and everything about him.
Christopher and Martin — 23 years
Christopher: Apologize. You will say and do stupid things you don’t really mean or feel. It happens. So be a man about it and apologize.
Martin: None of us are perfect. You make mistakes. It’s no big deal, right? When you say you’re sorry you diffuse the issue and either correct it or get back on track.
Christopher: I also make Devin put out if it’s his fault. And I have to do the same if I’ve been a jerk. After a while it became a game for us.
Martin: Like make-up sex, only better because there wasn’t a chance of really breaking up.
Michael and Daniel — 25 years
Fair fighting
Whenever we disagree, we’ve agreed to only fight about the topic at hand. Anything from the past that’s not relevant to the current disagreement is “not fair.” No fair bringing up the scratch he put on the red Prius or the money I “borrowed” from his wallet to buy another case of chardonnay. If either of us has a problem with past actions, we call “unfair” and return to the argument at hand. And if “unfair” items seem important, we make an appointment to discuss those later.
A clear division of duties
After referring to my homemade marmalade as “agent orange,” I abruptly ceded the kitchen to Daniel. After a laundry load in which my red t-shirt turned his tightie whities to a bright pink, he just as abruptly seized control of washing machine duties. This is fine by me since I like to eat and wear lots of clothes that I like to be their regular color. Nowadays, I do the dishes, clean the house, hang up his clothes, empty the cat box, put out the garbage, sweep the garage, pay the bills, and… wait. Cooking and laundry sound a lot easier. (Note to self: make appointment to discuss this.)
Sex
We both enjoy the gym and stay in shape well enough to still look pretty good, so we never tire of each other – and the bedroom is the ONE THING we never need an appointment for.
James and Jason – 37 years
James: It all comes down to common interests and goals, mutual respect and compromise… It also helps that Jason finally realizes that I am always right!
What are your secrets to a successful long-term relationship? Let us know!
Have you found the right one, or are you still searching?

Previous Post: 6 Relationship Mistakes Gay Men Make Over And Over Again Next Post: Gay Dating Tips: How to Ace Your First Date