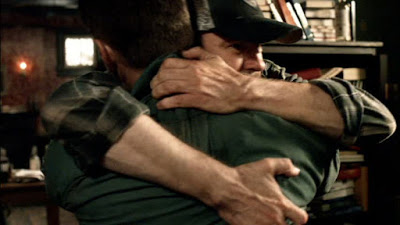 Original story from Queerty.
A man shared his emotional reunion with the gay brother he never knew on Reddit. His story will make you angry and sad, but it’s ultimately one filled with hope.
Our friends at GayStarNews found the story, which starts with a Nintendo 64 (remember those?) and ends with a reunion that’s right out of a Nicholas Sparks flick:

He was in his room playing while a guy, almost his dad’s age, had come over to the house while his 16-year-old brother was babysitting him. There was a big age difference between the two brothers at the time, but John would always do as his older brother, who we’ll call Ryan, said, as Ryan would pull him around in a wagon and babysit him often.
While he was asleep, John woke up to his brother whispering outside the front door. ‘Don’t worry, he’s asleep’, he said. The older guy then said something he couldn’t hear, but John could make out the word ‘visit’.
‘The next morning–the day he disappeared–my parents were at work,’ John said. ‘My brother was acting very strange. I remember he kept checking the clock. In the afternoon, I remember him picking me up and asking me if I wanted to go in the wagon. I was too hooked on Nintendo 64 and said no. He almost begged me and I said no again.
‘Then he told me he had to run to our neighbor’s house for something, I don’t even remember what he said. I said okay. He reminded me to not open the door for anyone, only mom and dad. I shouted at him “OKAY!” because Super Mario was getting on my fucking nerves and he wasn’t helping.
‘He gave me a hug and told me he loved me and left. He never came back.’
Ryan was declared missing, making the news, as a ‘creepy unsolved mystery’.

Eventually, John learned that his parents had taken Ryan’s name off the missing persons list. It turns out they’d disowned him after he came out as gay and told them he was living with a man.
Read more at: Queerty.
Have you found the right one, or are you still searching?

Previous Post: LGBT Partners Get The Attention They Deserve On #MilitarySpouseAppreciationDay Next Post: Gay Dating 101: Our Five Favorite Dating Tips