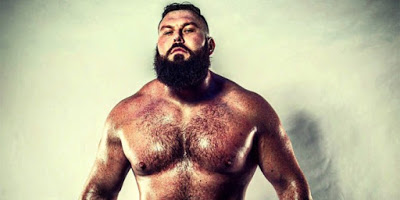 “I learned you can get very much masculine-shamed in the gay community.”

Professional wrestler Mike Parrow is speaking publicly about his sexuality for the first time, including the long and arduous journey he took to finally accepting himself.

Based out of Orlando, Florida, the 34-year-old says he first came out to family and friends four years ago, around the time that he met his now-fiancé, Morgan. But before that, the 6’4″ wrester, who weighs in around 300 pounds, tried to fight his same-sex feelings by dating women.

“The older I got, the harder it got for me to have any kind of emotional relationship with a woman,” Parrow told Gay Star News in an interview. “I would find ways to end it. I’d be like, ’Listen, I just don’t think you’re pretty.’ And I was kind of mean to some women. It’s wrong. And I wish sometimes I could have that back.”

When he moved to Florida in his late 20s, he thought it was the perfect time to finally explore his sexuality. Instead, he says it was “absolutely the worst experience in my life.”

“Gay men can be the meanest, cruelest people you’ve ever met in your life,” he said. “I was ’fat,’ I was ’ugly,’ I’m a ’closet case,’ and at the time I was just looking to understand what’s going on.”

“I learned you can get very much masculine-shamed in the gay community as of late, which is really weird, but it happens,” he added.

The situation placed him further into the closet and had him contemplating suicide. Parrow says at one point he even signed up for conversion therapy, something he now describes as an “absolute joke.”

It was when he met Morgan, however, that he finally realized it was worth being himself and he eventually gained the courage to come out to his family.

“It’s the most scared I’ve ever been in my life,” he told Gay Star News about talking to his parents. “I will jump off the top of a cage, go through barbed wire, fight someone in an alley—those things don’t scare me. But that had me in tears. I was afraid. How do you say those words: ’I’m gay’? And you won’t understand it unless you are a gay individual.”

As it turned out, he had nothing to worry about in the first place. His father hinted that he already knew and his mother, a Sunday school teacher at their local church, simply replied, “God doesn’t make mistakes.”

Read more at: NewNowNext.
Have you found the right one, or are you still searching?

Previous Post: Hook-Ups Were Fun at The Time But Always Left Me Feeling Empty Afterwards Next Post: Make Loving Your Priority