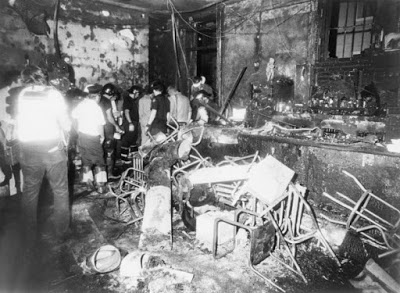 The 1973 arson is one of the deadliest attacks on LGBTQ people in American history.

Saturday marks the 44th anniversary of the UpStairs Lounge arson, a flash fire that killed 32 people in the New Orleans gay bar on June 24, 1973.
Until the Pulse nightclub massacre in 2016, it was the deadliest attack on a queer venue in U.S. history. But the event is still relatively unknown, even within the LGBTQ community.
A second–floor bar in New Orleans’ French Quarter, the UpStairs Lounge featured a pianist and drag shows, and was enjoyed by a diverse crowd.
Ronnie Rosenthal was 21 years old when he survived the fire.
“Everybody knew everybody,” Rosenthal told HuffPost via Skype. “The crowd that was at the UpStairs Lounge, they were all friends. Everyone was there to have a beer, some dancing, a good time.”
But the UpStairs wasn’t just a space for the New Orleans gay community to come together and socialize. It was also a place of worship. The Metropolitan Community Church was the first church in the U.S. to cater to LGBTQ congregations. Earlier that day, an MCC pastor, the Rev. Bill Larson, led a Sunday service at the lounge, followed by the weekly beer bust.
As the evening was drawing to a close, survivors later reported smelling gasoline, though they didn’t think much of it at the time. Just before 8 p.m., the doorbell rang, usually a sign a taxi had arrived on the street below. The bell kept ringing, though no one had called for a cab. When the door was opened to investigate, a fireball burst into the room and the inferno quickly spread.