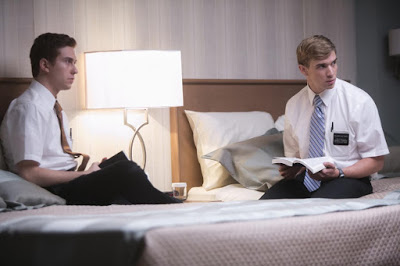 If you love creative narratives and artistic aesthetics, then you are probably familiar with the work of Jay and Mark Duplass (The Skeleton Twins, Animals). On the HBO anthology series Room 104, created and executive-produced by the brothers, they present the happy, the humorous, the dramatic, and ultimately the unique happenings that occur in one room of an average American motel. Each episode of Room 104 plays out very much like a one-act play, focusing on the intimate intricacies of human connection. With revelations, absurdism, and a sense of mysticism in a mundane setting, the show creates wonders.

Tonight’s episode follows two Mormon missionaries who have checked into room 104 for the night. The two young men, played by Nat Wolff and Adam Foster, begin to develop doubts about their faith as they simultaneously develop an attraction to each other. “Don’t you ever have doubts?” says one of them, Noah, and the words become the catalyst for the episode’s story, examining the effects of religious repression on young people, particularly on their sexuality, but keeping the action largely internalized. In the absence of anyone to reprimand the young missionaries for their forbidden feelings, they wrestle with temptation and seek enlightenment.


The Advocate had the opportunity to chat with Adam Foster, who plays Noah.


The Advocate: What was it like to work with the Duplass brothers on this project, as one of your first big credits?


Adam Foster: The whole experience was incredible. I got the part the old-fashioned way; my agents sent me on the audition, and I wasn’t really super sure about what it was for because there was minimal information —only that it was by HBO and the Duplass brothers. I knew it was a new series, so it was exciting and mysterious. The people were just so talented and everybody wanted to be there, and I think that’s a testament to the Duplass brothers — they wanted to surround themselves with people who wanted to do the job and create art.


The missionaries, over the course of the night, develop a possible homosexuality or sexual fluidity. How do you feel the Duplasses’ depiction of sexuality and discovery coupled with religious repression varies from other LGBT-related interpretations of the same issue?

One thing I can say is that I don’t think there’s any holding back. The topic is there, the Duplasses weren’t afraid to approach it, it was just them laying the issue on the table and choosing to spend more time on the development of that issue with the characters internally rather than making it a statement externally. I also appreciate the innocence of it — the story at its heart is about two adolescents discovering themselves, and I think that all adolescents, whether they’re under religious influence, find some moment of rebellion. I think this depiction is one that all adolescents can relate to, LGBT or not, because there’s a point where people start discovering themselves. It’s confusing, it’s scary, maybe it’s a sexual fluidity, maybe it’s not, or maybe there are so many feelings that they don’t know how to act or understand them yet because they’re not fully formed. So I really like that it’s all exploratory — it’s innocence, which is something that shouldn’t be suppressed. You’re told one thing all your life, and then you start to think, Is that true? and that’s a universally relatable feeling, whether you are gay, straight, religious or not.

Previous Post: 13 unbelievable things LGBT people have been blamed for Next Post: These Two Gay Papas are Showing Why Gay Surrogacy is Beautiful