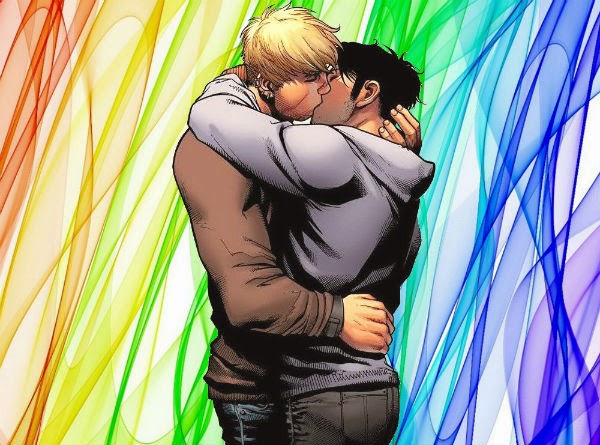 So what makes a healthy and lasting long-term gay relationship successful? Our society certainly doesn’t make it easy for us as gay men to date and mate with all the homophobia and discrimination that exists. Though this is slowly starting to change in many parts of the world, man-to-man love continues to be stigmatized and this backdrop of cultural oppression and hatred can put a strain on a gay couple’s budding relationship that many heterosexual pairs may take for granted. As a gay community, we lack adequate and visible positive role models of gay couples that provide hope for lasting relationship success. As men, we’ve been conditioned to define our masculinity in rigid and narrow ways as part of the socialization process growing up and this can create conflict when pairing up two individuals of the same gender looking for intimacy and emotional connection. And then we have our own layers of discrimination and pressure in our own gay community that at times can leave gay couples feeling unsupported and uninspired to achieve relationship longevity in the one place they thought they’d be safe—among their own.
While the odds do seem to be stacked against us in the fight for the dream of claiming our rightful husband with the accompanying house, white picket fence, and prideful rainbow flag securely attached to the front porch, they don’t have to be obstacles to our success. Having to face so much adversity has actually enabled many of us to be quite resilient in the face of stress and makes us good candidates for partnerships with the right focus and determination. There are many gay men in long-term relationships who can vouch for their fulfillment of this dream and speak of happiness and bliss in their coupled status. But what are the ingredients that make a healthy gay relationship?

There is no specific blueprint or formula for how to maintain a lasting and successful relationship. One of the beauties of being gay is that we can create our own definitions of what constitutes an ideal relationship for ourselves as we are not hampered down by restrictive gender roles and norms like our heterosexual counterparts. Each couple develops their own unique partnership that works for them. That being said, there are some universal qualities that can promote a more solid and functional relationship over the long haul for partners seeking long-term connection and happiness.

Successful gay couples can exhibit some of the following…

1. They share compatible interests and philosophies of life.
It’s important that partners have similar interests and hobbies to share in common to build experiences with together, but it’s also essential to have some differences as well to complement each other. This helps to keep the mystery and intrigue alive in the relationship that exists with contrast. Who wants to have an exact replica of themselves that they interact with on a daily basis?! Boring! What is absolutely critical, however, is that both partners will have a smoother and more fulfilling relationship if they share comparable value systems. This forms the foundation of what the couple believes in and is the diving board from which they co-create a vision for their future together as a united front and alliance for life.
2. They openly communicate with each other and stay engaged in each other’s lives.
This involves direct and honest dialogue about the mundane aspects of life to the serious thoughts and feelings that get triggered as a part of relationship dynamics. The partners create a climate in their home where each feels safe and comfortable sharing vulnerable aspects of themselves with each other and are attuned to each other’s needs. Listening skills are primed and each feels like an active participant in the relationship. Issues are not swept under the rug and are dealt with immediately in an assertive and caring way.
3. They manage conflict productively.
Healthy gay couples recognize that conflict is an inevitable and normal part of a relationship, seeing these “rough spots” as opportunities for growth and positive change in their partnership. They deal with their anger in constructive ways, avoid hurtful comments and assigning of blame, and take the time to understand and validate each other’s points of views before initiating collaborative problem-solving to try and reach a win/win solution. They are open to compromise and sacrifice and always keep a teamwork stance in negotiating their differences.
4. They have a balanced lifestyle comprised of both individual and couple identities.
In relationships it’s important to have time devoted to nourishing the relationship and also to focus on individual interests and pursuits. Too much “couple identity” causes both partners to feel suffocated. Too much “individual identity” creates a feeling of being disconnected and living as roommates. Striking a positive balance of both brings in just enough freshness and vitality to the relationship where boundaries are strong and healthy. Each partner feels supported by the other for striving for their own personal growth and goals without feeling threatened because the relationship vision is also being attended to simultaneously.
5. They have fun with life and try not to take things so seriously.
Life can be stressful, so why add to the tension with a hardened demeanor? Successful couples are those that are playful with each other, enjoy a humorous banter between the two of them, and feel energized by such things as tickling, cracking jokes, pulling pranks on each other, and being perverted with each other. All things are done in a loving way and this approach to their interactivity creates an atmosphere of laughter and celebration for being in each other’s lives.
6. They enjoy a sensual and sexual camaraderie that helps them to meet their erotic potential.
The happiest couples tend to report enjoying nonsexual affection in their daily lives through spontaneous touch, verbal strokes, holding hands, cuddling, and massage. They also understand the importance of maintaining a passionate sexual connection through regular pleasuring sessions and keeping their erotic lives energetic and enjoyable. Even for those couples in “open relationships”, the sexual relationship with their partner remains an important component of intimacy for them and they find ways to meet each other’s needs, even when one isn’t necessarily in the mood.
7. They have a supportive network of family and friends who honor their relationship
Having the backing and encouragement of loved ones can be a great impetus for reinforcing a gay couple’s commitment. Surrounding themselves with positive and affirming people can be a great boost.
8. They are comfortable with their sexuality and not afraid to show it.
Sexual identity struggles and internalized homophobia can really drag a relationship down unless both men tend to be in the same boat with their levels of outness. Confident and successful gay couples are comfortable being in relationship with each other no matter the setting or public domain. Whether it’s trying out a mattress at the local bedding store or attending a social function in a mixed-orientation crowd, these couples feel secure enough in their identities and relationship to combat any potential homophobia they may face by proudly being themselves. Being able to be free and uninhibited is a truly liberating feeling for a gay couple.
9. They possess the following in their partnership: trust, commitment, honesty, openness, flexibility, loyalty, dedication and devotion, quality time, sensitivity, nonjudgmental attitudes, loving and unafraid to express their feelings and passionate side, etc.
These are obvious hallmark characteristics that typify a healthy relationship, but gay men in particular are vulnerable to power struggles, competition, and issues surrounding intimacy and closeness due to male socialization in their man-to-man relationships. Successful couples are aware of these pitfalls and work hard to embrace a holistic masculinity that counters the stereotypes they’ve been engrained with.
10. They place a high premium on their lives together and are focused on not taking each other for granted.
Successful gay couples realize that the busyness of life can very easily put their relationship on the back shelf, but they don’t let it! They ensure that they devote quality time together, schedule special “date nights” with each other, and are attentive to each other’s needs. They make sure they are diligently working toward their shared relationship vision, validate their partner in the ways he likes it most, and make sure to show through words and actions how much they appreciate their guy being in their lives.

So how did you and your partner do? These are only some of the qualities that comprise a healthy gay relationship and it’s up to you and your man to define the parameters of what that would look and feel like for your unique relationship. Use these tips as a springboard to discuss how things are going in your relationship to gauge your strengths and areas for growth and craft an action plan to make things even better between the two of you.
Have you found the right one, or are you still searching?