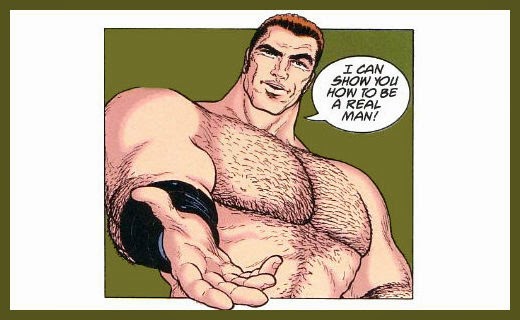 We’ve tricked ourselves into thinking that masculinity is the only way for the world to take us seriously…
There’s always an opportunity for a guy to prove himself either to the world, a lover, a friend, a boss, or a family member. I remember growing up in a home where a man’s livelihood depended solely on how much he can offend people who threatened his manliness. I hate to say it, but it definitely rubbed off on me from the get go.
Boys are trained early on that being masculine is to be aggressive, alpha, powerful, dominant, and revered. As we grow up, we learn to associate our values based on that system. The more masculine we are, the better chance we have at gaining respect. The more masculine we are, the more attractive we’ll be to the world. The more masculine we are, the less evidence the world may have to target our gayness.
When we come out of the closet, we’re not changing our pasts. We’re still men who’ve surpassed the prism of lies. All men, regardless of their orientation, have been somewhat brainwashed by the idea of masculinity. It’s not an easy cycle to break free of. We’ve grown comfortable in using a “Man Diagram” as a way to judge our worth.
Masculinity matters to me not because it makes a man better at sex or makes him more appealing as a boyfriend, but because I’ve associated it as the only way to gain approval from the world. It’s a mask; a tool we’ve been using since the dawn of time to redirect focus from ourselves. We build it through layers and layers of actions, which ultimately shape the world’s perspective on us. We’re fighting so much to keep our masculine badge we’ve become mental slaves to the idea. It matters to us because we’ve tricked ourselves into thinking it’s the only way for the world to take us seriously.
It took me a while to shed my old skin. Years of pretending and trying to be approved by straight friends created a wall. To this day when a straight guy looks at me, I can’t help but wonder if he’s judging me based on how masculine I am. Though I’m sure they’re not, the thoughts are still there from years of habit. And I know I’m not the only gay person who thinks like this.
Back in the 60s and 70s when gay people were called queers, we embraced the fact that we were different. Gayborhoods in San Francisco and New York City were filled with queens and flamboyant personalities not because they wanted to shock people, but as an act of rebellion. We were queer and here to stay. We saw right through the world’s bullshit and refused to conform to anything except who we genuinely were as a person and how we felt inside. This created an enormous amount of community, but that community is disappearing fast. As the world grew to accept LGBT people we had no reason to rebel anymore. We were a part of society, which is what we secretly wanted. With that came a reprise of the masculine game we once desperately fought against.
Masculinity isn’t about trying to be manly. It’s about trying to fit in. We think we need it for our own protection so we can have a defense against the world. But the only person we’re trying to defend ourselves from is ourselves. Men and women see masculinity as they always have. It’s a symbol of our worth in the world, and everyone wants to be someone of value. We’re always going to want to please because we’ve realized it’s the only way to survive. Yes, masculinity matters. But in the grand scheme of things, it shouldn’t. It really shouldn’t.
A man with the courage to throw away centuries worth of expectations is always going to be honored, for how can we please the world when we’re not even pleased with ourselves?
Have you found the right one, or are you still searching?

Previous Post: Top vs Bottom: How Important Is Your Sex Role? Next Post: A Dating Guide for Gay Virgins