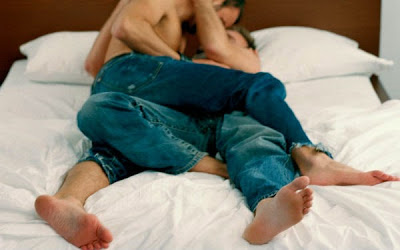 When our man is great at sex, you don’t really need to think about it. It’s evident by the way you want him time and time again, but despite how much you know, there are definitely some big signs to tell you just how good he is. Here are just a few:

#1) He makes you clench and shiver without your permission.
There are many zones in our body that tickle our fancy, and when a guy hits any one of them, our body sends us the message directly. A few of these and there will be no questioning whether we liked it or not – it’ll be obvious. After it’s all over, our sense memory will trigger the shivers every time we remember.

#2) He never makes you feel insecure about your body.
It’s hard as gay guys to not think about our bodies. Men are visual creatures, after all. But only an asshole will make you feel weird about your body during sex. A great guy will, in a sense, bring you out of yourself and awaken your mind and soul. He makes it an outer body experience – one that completely connects you and he together.

#3) He’s expressive in his everyday life.
Does he like to talk with his hands? Tell a great story? Knows when to act goofy and when to be serious? Chances are, he’ll also express himself in bed. He knows how to channel these things into sex, giving him an intuitive sense of how to please in the moment.

#4) He doesn’t brag.
He’s a humble person who is a total gentlemen outside of the bedroom. He gives an air of mystery – is he good or isn’t he? The fact that he’s a total class act makes hi even more sexier, and, gives you more fuel to completely surrender to him when his dominant side comes out to play.

#5) You don’t want him to stop, and vice versa.
Life’s greatest philosophy is to always leave them wanting more, and the same can be applied to sex. But when it’s really, really, good, we don’t want it to stop. Even after both of you came, you still want to touch him, smell him, feel him, kiss him.

#6) He cares more about making you come than himself.
It’s such a breath of fresh air to be with a guy who gets more pleasure pleasuring than receiving. My last boyfriend was like that, and boy oh boy, he knew how to do it right. But that didn’t mean I was selfish – I did my part just as much as him, but when you’re dealing with a pleaser, it’s best to just sit back and let it happen.

#7) He enjoys doing new things.
Change is one of the greatest ways of knowing how interesting your man is in the sex department. He wants to get to know your boundaries, he’s intrigued by spontaneity, and he welcomes ideas and goes with whatever the mood is. Surprises are always a sign of great sex.

#8) He respects your boundaries.
He stops when you say stop, he delivers when you want more, and he knows when enough is enough. The goal is for both of you to have a great time, and nothing will interfere with that – including his drive. Even though he might be ready to go, it doesn’t mean he’ll disrespect your limits.

#9) He remembers what you like & don’t like.
When you don’t like something, he makes a mental checklist and never tries to visit it again. He’s no idiot. He listens to your responses and knows how he got you to moan and groan. He wants to be the best he can be, so he strives to do only that.

#10) He affirms how great you are.
He gives you confidence in your sex appeal, because he knows when you’re confident, he’ll be confident. It’s a shared experience in that way.
Have you found the right one, or are you still searching?