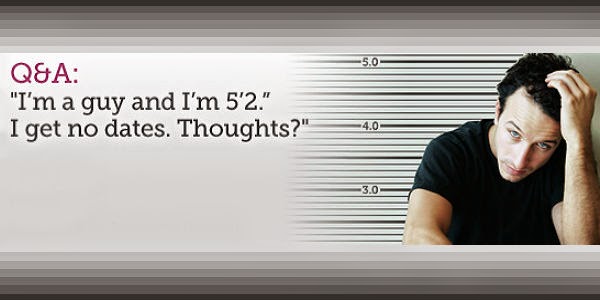 Good things come in small packages.
Overwhelmingly, a lot of gay men prefer tall guys. But if the ideal man is tall, dark and handsome, are gay guys who are short, blonde and ugly really the least likely to find love?
Not necessarily. In my coaching practice, I’ve found that diminutive gay men who hone in on the science of attraction can be as lucky in love as their taller counterparts. Are you short? Do you want to be irresistible? Below are five unbeatable ways to attract the other guys.
1. Be confident. Short guys who have dating success understand that being short or tall doesn’t define who you are. It is the way you perceive yourself that causes someone to be attracted or turned off to you. If you walk around as if your height is a hindrance, then other people will see you as less attractive because having a lack of confidence is always a turn off.
Many men in Hollywood are vertically challenged and do not let that stand in their way of attracting love (i.e. Tom Cruise, Prince, Kat Williams, Michael J. Fox, Danny Devito, Seth Green and many others). Keep you chest full of pride and your head up high and you too will stand out as a desired catch!
2. Be funny. Many gay men surveyed said that they would prefer a funny man to a serious one any day of the week! Funny guys are attractive because it feels so good to be around them. Most beneficial for funny guys are that whenever he makes someone laugh, he forms a positive association to seeing his face. If you are not naturally funny, take a comedy class or tap into your funny bone because a sense of humor will make any short man a tall cup of attractive!
3. Be social. Some gay men are much more attracted to guys with great personality. If you can become gifted at mingling and attracting a crowd then you will have no problem attracting with other guys. The psychology behind this is that people want to be around people who are desired by other people and it is easier to be approached. Never sit alone at a party and always find a way to bring a group together and soon other guys will be exploring what makes you so appealing.
4. Embrace the friend zone. Gay men balk at the idea of becoming a “friend” because they fear that they will be pushed into the friend zone and forever be locked there. However, the truth is that when another guy finds you attractive, friend or no friend zone, he will be open to taking the relationship to the next level.
His guard isn’t up to a friend and he will most likely not resist falling for you if the connection between the two of you develops. If you start off as friends and he has a chance to get to know you, have fun with you, and also has an opportunity to fall in love with who you are, he can and will most likely be able to accept your height and love you for who you are!
5. Own your height. Look for other guys who are shorter than you by joining online dating sites for shorter people or approach other gay guys who are short. Finding a man who is also vertically challenged will give you both a commonality and minimize your height as an insecurity in your relationship. Everyone has a reason to be insecure about something. Owning the fact that you are short and not accepting that it limits you in the love department will give you an added advantage to love.
Tall men, take note, pay attention. Sometimes the best things in life come in smaller packages!
Have you found the right one, or are you still searching?