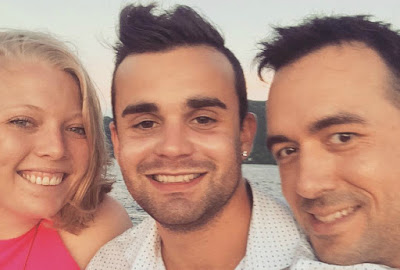 A New York City-based thruple – sometimes known as a triad – have spoken out on their unusual living arrangements.
In an interview and video for The Sun Matt and Chris Brandt, who have been together since 2008, explain how they met Cait Earnest.
Chris, 38, is bisexual. Matt, 28, now identifies as homoflexible. He and Matt had begun to explore having an open relationship, and Chris came across Cait, 28, on a dating app in 2015.
The two immediately hit if off, leading Chris to ask Matt if Cait could join their relationship. At first, Matt was reluctant but eventually agreed to give it a try.
‘At first Matt was completely opposed to the idea but after a while we talked about it and he warmed up to it,’ says Chris.
Cait, who also identifies as bisexual, began to spend nights with the men in their one-bedroom apartment and, after a few months, was there five nights a week. It made sense for her just to move in. The thruple have been together ever since.
Matt and Cait both admit that they had to negotiate some feelings of jealously and insecurity at first, but are now much more settled.

The three share the same bed and enjoy sex together.
Cait says, ‘I had never been with two people at the same time before. It’s different strokes for different folks but I would say it’s a pretty fun sex life.’
Matt suggests the relationship has changed his attitude towards sexuality.
‘I prefer men. I guess I had an awakening after I had a sexual experience with a women. It is just another body, another soul, a connection that I can have.’
Matt and Chris decided to marry in St Lucia in late 2015, but wanted to make sure Cait was involved, and asked her to officiate the ceremony. They say they’re families are supportive of their relationship.
Read more at: Gay Star News.
Have you found the right one, or are you still searching?