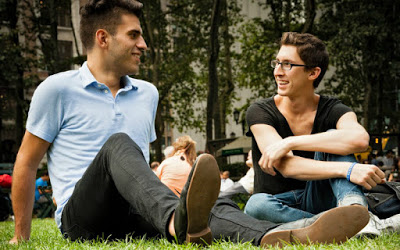 Valentine’s Day is just a few days away and gay couples are presumably planning for their date with their significant others. Although Valentine’s Day is a day of romance, it is the MOST stressful day of the year for singles — particularly those who don’t have someone special in their life. However, if you are single and still looking for a perfect date then here’s some help.

The first step is to decide what are your “dating goals”:

If you’re just looking to meet new people and keep it casual, then meeting through friends or work, free online dating or Smartphone dating apps, meet up groups, singles events and activities or bars can work.

If you’re looking for something more serious, try a higher end/paid online dating service, or a professional matchmaking service.

In 2018, gay dating has gone truly digital. Any stigma which may have surrounded searching for love online has been banished, and meeting for a mid-week online date is no longer something people feel they have to lie about.

How to prepare for a first date and avoid being nervous?

Take the time to look your best, as that’ll make you feel more confident. Come prepared with some fun conversation topics to discuss on your date (travel stories, things you did over the holidays, movies, etc.).

Don’t worry too much about “chemistry” — focus more on making sure your date partner is having a good time. Go on your date with a “second date mindset” — resolve to see the person a second or third time unless the first date is a complete disaster. A second date is a much better time to really get to know someone.

Be prepared with some fun and interesting conversation topics to discuss on your date. If you’re feeling really nervous during your date, let your date know that it’s because you haven’t been on a date for a while — they’ll understand.

Above all, be positive! Don’t let being single on Valentine’s Day get you down!

Don’t rush into anything and proceed at a pace that you’re uncomfortable with — there’s no right or wrong time to become more intimate with someone. This particularly applies if you’ve meet someone online or on a hook-up app!

Once you have met someone you’ve really connected with, your best bet is to focus on them and put a pause on dating other people for a while.

How soon should a person call for the second date? Or how long should you wait to speak again?

The best time to ask for a second date is while you’re on a first date that’s going well! Forget what you’ve heard: there are no rules about when you should speak to someone again. If the date has gone well, the sooner the better! Texting or emailing someone the next day and thanking them for a fun night is a polite and nice way to let them know you’ve enjoyed meeting them.

What is the best environment for a first date?

If you met someone online, best to go for a daytime coffee date in a public place, or an early evening after work drink at a local spot can also work — be smart and safe about meeting someone for the first time.

If you’ve met someone through work, friends or a matchmaking service then it’s okay to meet for an evening drink & appetizers.

In general, you want to keep the first date casual, avoid booking a long dinner in case you find that you’re not really connecting.

Going for dinner is a better option on a second or third date once you know you’ve got some “chemistry.”

Valentine’s Day is really just another day and it is what you make of it – you can chose to downplay it or create your own reasons to celebrate it.

Have a plan for the day so you are not at home feeling sorry for yourself! If you have something to look forward to you won’t get feel like you are missing out. Why not get together with your other single friends or people you love like your family?

Treat yourself to a massage, a pedicure, buy yourself some flowers or a special piece of jewelry that you have always wanted. The bright side is at least you will be guaranteed to get the perfect gift for yourself!