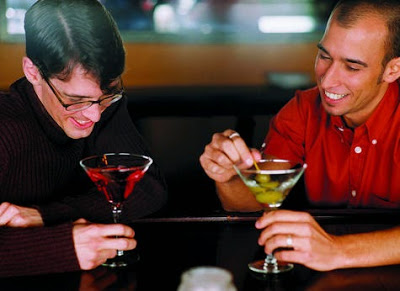 Portland, Oregon is a very gay friendly city, very warm and very welcoming to everyone.  There is no specific gay ghetto, and the gay and gay-friendly establishments are everywhere, so just look around!  NW 23rd Avenue is a very nice area, similar in feel to some San Francisco neighborhoods blended together.
The Burnside Triangle is an area in Downtown Portland. It is centered around SW Stark St. and comprises a triangular set of city blocks. It is arguably Portland’s most visible gay neighborhood and Greek thoroughfare.
Bounded by SW Alder St., SW 14th Ave., W Burnside St., and SW Broadway, the district contains a combination of gay and gay-friendly businesses such as independent shops, restaurants, housing, and social services. It has been a meeting place for Portland’s LGBT community since the turn of the 20th century.
Hawthorne is the “queen” of the many funky and gay-sensible neighborhoods on Portland’s slightly sprawling East Side.  It has a long reputation as the center of Portland’s lesbian scene, but Hawthorne is quite popular with anyone who has an alternative, progressive bent, and many parts of Portland (especially on the East Side) have a discernible lesbian presence.  Hawthorne Boulevard is fairly interesting, but for a few dull pockets, for about 45 blocks, from roughly S.E. 10th Avenue clear out to Mt. Tabor Park, at S.E. 55th Avenue. It’s also near and parallel to some other engaging East Side commercial strips, such as Belmont to the north, and Division/Clinton to the south.  Among the many popular businesses in the neighborhood worth checking out include the lesbian club The Egyptian Room (it’s on nearby Division Street but very close), gay-popular Palio Cafe (within walking distance, in nearby Ladd’s Addition), the McMenamins Bagdad Pub and adjacent McMenamins Bagdad Theater, Bread and Ink Cafe, the Cup & Saucer Cafe, Vincente’s Pizza, and the Hawthorne branch of Powell’s Books.
On the West End of downtown Portland, just off of West Burnside Street, Southwest Stark Street holds one of the city’s small gay entertainment epicenters. Along here you’ll find a number of gay bars and gay-friendly restaurants, including the long-running gay bar Scandals;  a landmark gay entertainment complex, Boxxes; the Roxy Diner; the Ace Hotel; and Stumptown Coffee.
Boxxes (1035 SW Stark St., 503-226-4171), as well as a restaurant and lounge called the Fish Grotto, is an always-hopping spot that takes up half of a city block along Stark Street, just across from the gay-popular Ace Hotel.  Boxxes is a brightly lighted space with cozy lounge chairs, tall cocktail tables, and a smaller dance floor. Theme nights and drag shows keep things interesting, and the crowd is among the most varied of any gay hangout in the city – it’s really an all-ages, mixed-gender bunch. If you hit this place on an off night, it can be a little quiet, but for the most part, this gay party playground offers plenty of fun throughout the week.
One of Portland’s many great attributes is its first-rate, cheap public mass transit.  Portland’s Light Rail is part of the city’s comprehensive TriMet system, which also includes an extensive network of buses as well as the handy Portland Streetcar, which connects the South Waterfront to Northwest Portland via downtown and the Pearl District. MAX is a cheap and easy way to get from Portland’s airport into downtown for a little more than $2 – there are three lines covering several parts of town.
Probably the most remarkable thing about TriMet is that all of its various modes of transport are free, both to residents and visitors, inside downtown’s central Fareless Square.
Visitors and Locals get together for Northwest Pride every June.  Portland is full of pride every day, and is a must “go to” when visiting the Pacific Northwest.
Have you found the right one, or are you still searching?

Previous Post: Are You Dating a Player? Next Post: Finding Happiness: The Key to a Happy Gay Life