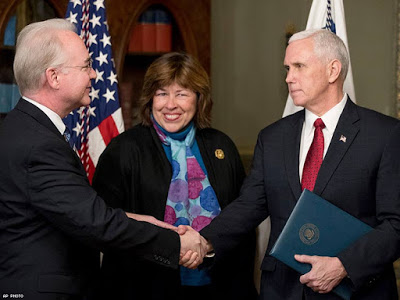 Researchers have revealed that under the Trump administration LGBT+ language, data, resource pages and anti-discrimination information has been disappearing from government websites.

The research was conducted by the Sunlight Foundation’s Web Integrity Project (WIP) which says its “mission is to monitor changes to government websites, holding our government accountable by revealing shifts in public information and access to Web resources, as well as changes in stated policies and priorities.”

Researchers combed 142 government websites that included LGBT-related information, all created before Trump took office, to create a report looking at how LGBT+ content and language had changed during Trump’s presidency.

Compared with previous versions of the pages accessed via Internet Archive’s Wayback Machine, the WIP found that 57 percent pages had altered LGBT+ terms.

On pages under the US Department of Health and Human Services (HHS), the same department that Trump has been trying to give the legal right to discriminate against LGBT+ people on religious grounds, the use of the word “transgender” decreased by 40 percent.

The use of the term “faith-based and community organizations” increased by 875 percent and “religious freedom” by 667 percent.

The HSS Office of Disease Control and Prevention removed the term “LGBTQ” from its page on LGBT+ youth, and replaced it with “LGB”. It erased “statistics and references on transgender populations”, including trans suicide statistics, from the page.

The office has also seemingly changed goals on its Healthy People 2020 website for collecting data about LGBT+ people, without publicly reporting the change.

The report states: “Without notice or annotation, as was done for past revisions, the 2020 coverage target for the ‘number of states, territories and the District of Columbia that include questions on sexual orientation and gender identity in the Behavioral Risk Factor Surveillance System (BRFSS)’ objective was reduced from ‘total coverage’ to a “10 percent improvement.”

The Department of Labor removed references to a still existing Obama-era executive order barring discrimination by some federal contractors based on gender identity and sexual orientation, known as EO 13672.

Johnson’s executive order did not refer to gender identity and sexual orientation, but Obama’s EO 13672 built upon it to add them as protected classes.

Another page with links to “community and other resources” to assist federal contractors with compliance with EO 13672 anti-discrimination rules was completely removed.

Frank Bewkes, a policy analyst with the Center for American Progress, told WIP: “These changes are notable because EO 13672 is still in effect, unlike other Obama-era EO’s revoked by the Trump administration.

“And as public-facing information that sought to educate people on the state of federal anti-discrimination measures, materials related to EO 13672 were an important resource for people to learn about their rights.

“The rule is what the rule is, until it changes. You can’t change something preemptively.

“Essentially all they’re doing is hiding the ball and making people less aware of what their rights are. And that is a problem.”

The Department of Housing and Urban Development (HUD) removed information on the Fair Housing Act and how it relates to LGBT+ discrimination in housing.

The Trump administration “removed a graphic affirming HUD’s commitment to ending housing discrimination against LGBT people and their families, an explanation about how the Fair Housing Act applies to LGBT populations, text affirming that discrimination based on HIV status is illegal, and links to resources including the final rule on equal access to housing for LGBTQ.”

The report also states: “Since President Trump’s inauguration, his administration has made numerous formal policy changes, as well as informal policy announcements, that affect the rights and lives of lesbian, gay, bisexual, transgender, and questioning (LGBTQ) Americans.

“Our goals are to ensure the public is aware of the changes that are happening on websites and agencies are held accountable when they unduly alter or remove access to information that the public relies upon and which can seriously affect the rights and opportunities of Americans.”