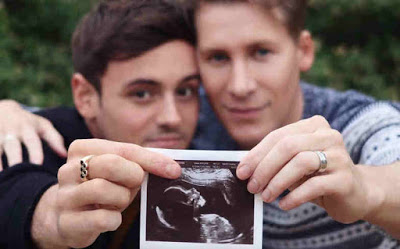 A massive congratulations are in order for fathers-to-be, Tom Daley and Dustin Lance Black.

The couple wished their followers a happy Valentine’s Day by revealing a scan of their unborn baby, which they will welcome into the world in the coming months.

Dustin Lance Black covered Gay Times for our January 2018 issue earlier this year, and spoke about the time he first met the man who would become his future husband.

“I met him in the United States and I think he’s more well known there now than he was,” he revealed.

“And so I didn’t know, I wasn’t aware, that he was beloved in the way that he is here. I mean I found him really charming and lovely and, obviously, fell madly in love with him right from the beginning.

“But I had no idea that so many people in his home country were also in love with him. It wasn’t until I came to visit here many months later that I realized.”

He added: “We went out for a dinner and there were paparazzi trailing him and people coming up to him asking for pictures.

“At this point I’ve made films with Leonardo DiCaprio and Sean Penn and James Franco. I’ve been around some very well known people in public and I had never seen that.

“Someone might come up and ask Leonardo DiCaprio for an autograph or a photo, but there was a different level of intimacy with how Tom was approached which I found so cute.

“There is this sense that he’s the nation’s son. And I said, ‘Boy, that’s incredibly intimate and really sweet. Don’t take that for granted.’ And I don’t think he does, so I don’t find it intimidating, I find it really sweet for the most part.”

Speaking further about their relationship, Dustin added: “We’ve been together now almost five years and I’m still discovering new things about him and I feel really lucky about that.

“There’s a constant renewal to our relationship and I’ve never experienced anything like it. It’s really exciting. I mean, we’re certainly not two perfect people.

“We have fights. Although when we fight, we just get very, very quiet. And then we know we’re in trouble, one or the other! We’re certainly not doing it for public approval.”

Tom and Dustin first got engaged back in October 2015, before tying the knot during a ceremony in front of family and friends last May.

“When Tom and I met four years ago I knew instantly I was in trouble,” Dustin says in their wedding video, which they shared with fans.

“I knew I had met my match, someone who would inspire me, someone I could admire, but also somebody who would naturally be my best friend.”

Tom adds: “Lance is one of the most complicated creatures on the planet, but that’s why I love him.

“He’s sensitive, courageous, committed, dedicated, hard-working and, above all, he makes me feel safe.

“When I’m with him I feel like I can take on the world.”