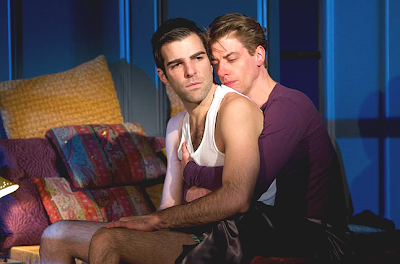 While there were a couple of good points made, for the most part we GAGGED at what we were reading (if your relationship can’t survive a Facebook status, you got other issues). It also made us feel sad that men really attribute these shallow reasons to why their relationships aren’t working. We felt it was only natural for us to give our OPINION on why many Gay Relationships fail.
1. Thou Shall Communicate – We as men are taught to bottle up our emotions, lock them away in a vault, and leave them to be internally dealt with at a later time. Little do we know, every time that bottle is shaken the pressure continuously builds until the bottle bursts. In relationships, this manifests itself in the form of resentment, bickering, petty arguments and the like. That can be the beginning of the end of your relationship. Letting your partner know what’s going on with you and/or that what they are doing or saying is affecting you is paramount for a successful relationship. Keep in mind that LISTENING is also a part of communication, so be sure to hear what your partner is trying to communicate to you as well.
2. …such a huge EGO – We all have one. We are born with it. And it’s not going anywhere, right? WRONG! Ego is perhaps the #1 root of all evil in gay relationships. As if having two head strong alpha males vying for leadership isn’t enough, add in the self-fulfilling, narcissistic nature of the EGO and making a relationship work really becomes a constant challenge. Everyone is out to win when the ego is involved and we must understand that relationships are not about competition amongst partners but rather remaining on common ground with each other. How can you remain on common ground when your ego is telling you to go for the win? You can’t. And you won’t – at least not for the long haul.
3. Like Talking to a BRICK WALL: Vulnerability – Everyone’s afraid of being hurt and no one wants to be the fool so over time we build a wall between us and the world. We say it’s for protection but what are we hiding from? We are scared to give someone our heart completely because of the fear of being abandoned. We ask ourselves questions like, “Will he love me as much as I love him”? But how can you truly win at love if you are not giving up all of yourself? Don’t be afraid to let your man know how much you love and care for him. SHOW HIM. Stop playing the games. Stop giving the “let me see if he really loves me” tests. The more games you play the more you push the possibilities of a REAL relationship away. So knock down those stubborn bricks and allow yourself to BE VULNERABLE!
4. Bed Room Eyes – “What your man won’t do somebody else will.” I’m sure we all of heard this statement a million and one times before. We sometimes pinned up sexual desires that our partner may or may not want to partake in. The fact is, most times we don’t effectively communicate to our partners what we really want in the bedroom. We think we know how they will react to our desires therefore we don’t give him the chance to answer for himself. Sure we may mention it in jest or make a small comment about it, but have you actually sat your partner down and expressed to him your needs/wants/desires? Whatever your needs are, your partner has a right to know the importance of those desires to you. Be open about what you want and go from there. You might be surprised by what you discover about each other.
5. The “Grass Is Greener” Syndrome – It seems as if gay men find it hard to settle down because they are continuously on the prowl for the next best thing: someone with a hotter body, a cuter face, more money, fancier clothes, etc. If we dig deeper, past these superficial things, we would realize that these materialistic treasures are oftentimes a mere cover up for deeper issues.
6. “No Pain, No Gain” – One of the biggest mistakes we make as gay men is abandon our relationships when the going gets tough. Some take it as a sign that the relationship is over because it should never “be this hard”. Relationships are here to challenge each of us individually to help us get over internal hurt, pain, insecurities, shortcomings etc. In order for us to allow relationships to help us grow into a better & stronger person overall, we have to be ready to face what’s TOUGH. Don’t cop out of your relationship by doing what’s “easy”. There will ALWAYS be bumps in the road, so be up for the challenge.
Have you found the right one, or are you still searching?