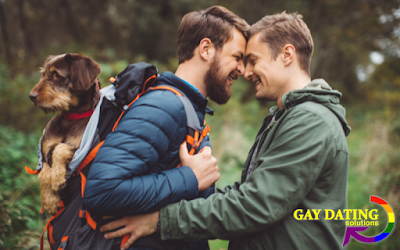 Happy relationships don’t happen by accident. It takes two emotionally healthy, loving people who are committed to being the best partners they can be.

“What makes a relationship healthy?” It can be challenging to spot the signs when you’re enjoying romantic dinners, handmade cards, and mind-blowing sex. I took a look back at the things I’ve done (and had done to me) to present you with the 7 habits of healthy gay couples.

Couples should take five minutes each morning and each night to simply hold each other. This is a wonderful way to start and end your day. Though you may give a hug before leaving for work or hug your partner before falling asleep, this is a focused moment to consciously share with your partner.

Always kiss him hello and goodbye.

Far from being a meaningless habit, this ensures that you connect, even for just a moment, at least twice a day. Many people in unhappy relationships say that they can’t recall when they stopped kissing at greetings and goodbyes, it just slips away without effort. When you make the time to make eye contact with your partner and kiss him, it shows that you prioritize your relationship even during the busiest of mornings or evenings.


Every night, go talk about your day at work, your concerns, your future, and pretty much anything else you want to get off your chests. It is your special moment where both of you are spending quality time with each other and are most relaxed.

Give without the expectation of getting anything in return.

You give out of compassion, empathy, and mutual respect. In an unhealthy relationship, giving is used as a tool to get something in return. Avoid the quid pro quo mentality by giving from a place of presence and abundance, not just so he’ll assemble your shelves from Ikea.

Choose to see the best, not the worst.

We choose where we want to place our attention. And as the saying goes, where attention goes, energy flows. In every situation you have two options: (1) You can nitpick and use that as an excuse to end the relationship, or (2) You can choose to appreciate what’s good about your significant other.

Most of us these days live a fast-paced, technology-packed lifestyle. Time spent outside together benefits your mental wellbeing. Make it a habit to spend more time together in nature: exercise outside; have lunch outdoors; and spend as much of your weekends as you can out in nature.

Apologize because you care, not to make a problem go away.

You don’t get points for saying “I’m sorry” abruptly or for playing the martyr. An apology isn’t about making a fight go away, it’s about overcoming an issue as a team. In a healthy relationship, you choose to be happy rather than right. Often that requires a sincere apology. To do that, don’t end an apology with a qualification (“I’m sorry, but…”). Instead, take responsibility (“I’m sorry because I…”)

At the end of the day, healthy relationships should leave you feeling energized, whereas an unhealthy love leaves you feeling drained and disconnected.

The choice is yours.

Previous Post: WATCH: Man Proposes to Boyfriend During Baseball Game and The Crowd Goes Wild To Top Next Post: Republican Congressman Whose Life Was Saved By Lesbian Cop To Speak At Anti-LGBTQ Convention