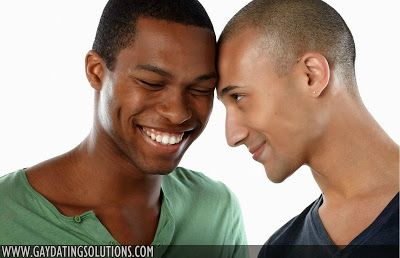 Black. Gay. Men. When you think of this combination, it’s often in a negative connotation. It’s rare to think of a gay black man in a stable, loving relationship. Gay black men are often associated with promiscuity or on the down low.

That’s due in part because gay and bisexual men account for the largest number of HIV diagnoses, according to the Centers for Disease Control. “One of the misconceptions about black gay love is that it’s probably not going to last,” said Marvin Parrish.

But for many couples like Marvin and his husband TJ Mosley, monogamy is the new black. For gay black men, being a one-man man may be more common than you think.

Ric and Bre (not their real names) have been married since 2016 – it’s what makes them different that initially drew them together.

“We are an opposites attract type couple,” Ric said. “He’s the introvert, and I’m the extrovert,” Bre added. “I’m a social butterfly. I like to meet new people, make new friends. He takes things slow.”

But married life hasn’t changed the relationship they spent more than eight years building. “The truth is a lot of people say that when you get married things change and stuff like that,” Bre said. “But, to be honest, it feels no different. I feel like I’ve been married to him just as long as I have been in the relationship with him. And we’ve always shared our finances. We’ve always discussed major plans and we’ve always, you know, we’ll tell each other that the depth of our love has always been consistent. And so once we got married, it was, like, oh, well, nothing really changes.”

Being together has taught Eric and LaVell Christian no relationship is perfect. The Maryland couple has learned to cope with the ups and downs.

“We are human,” Erics said. “Things are not always peachy. We are not always in a good space. We don’t always desire to be the ‘life of the party’ or center of attention. In those times, we do remember that our life has been deemed as a beacon of light to others. We remind each other that, it is an honor to be selected as such. It is our job to work through whatever problems, and show our peers, that even in rough times, we must handle ourselves accordingly.”

Marvin and TJ say they have learned to be there for each other, so they always feel wanted.

“It’s so easy after many years of being in a relationship with the same person for each of you to become invisible to each other,” Marvin explained. “With work, bills and most of all social media, all these things can create a barrier between two people. My husband and I really took this year to set aside all these things and continue to make each other our number one priority.”

Being together means a new feeling of security and support. “My husband has given me the opportunity to leave my longtime job and focus on finding something that makes me happy,” Marvin said. “He understands I have the potential to be great at whatever I set out to do and that has truly made our marriage much stronger. I am happy to have someone who stands by my side.”

Marvin is so proud and wanted to flaunt his relationship – so on Valentine’s Day 2017, he planned an elaborate photo shoot with other male couples of color. “I want the photos to speak volumes to what our relationships are,” he said. “The images communicate how much we love and support each other.”

Eric and LaVell say the photo shoot was a chance to show how proud they are of their relationship. “We try our best to show ‘our kids,’ our friends, our associates, being a relationship such as this… is a blessing,” they say. “As black men, it is very rare you find that someone to call your husband. We do not take the ‘role model’ title lightly. We try to make sure we uphold such a title at all times.”

Eric and Bre say the experience was a way to show how proud they are. “It felt good to be that unity, showing people there’s another side of LGBT relationships,” Bre said. “Most people don’t see that our lives are just as normal as any others.”

While the images sparked a lot of positivity, there were also the social media trolls, homophobes, and naysayers. “People were private messaging me, calling me a faggot and telling me to die and go to hell,” LaVell said. “I mean, they don’t even know my story.”

All of the couples were on the receiving end of vile, hateful comments. But Marvin and TJ say the good definitely outweighed the bad.

“All attention is not good attention,” Marvin said. “Despite the negative feedback, my husband and I will continue to spread love and support. For us, love wins.”

Previous Post: Instagram Rejected an Ad For HIV Meds Because The Topic is ‘Too Political’ Next Post: Netflix’s New Christmas Movie Let It Snow Features a Queer Love Story