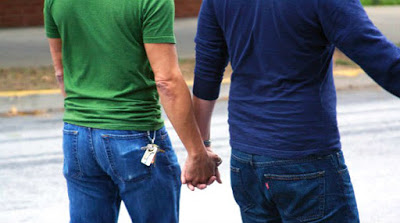 Intimate relationships come in many flavors: dinner-and-a-movie dates that develop slowly into something else, dating one guy exclusively and becoming boyfriends, establishing something more permanent, perhaps as lovers or husbands or partners.

Some relationships evolve hastily; others take time. Some men are comfortable “playing the field,” while others move so quickly to stake a claim on a boyfriend’s affections that it feels like a return to California Gold Rush days.

“An unarmed encounter between two vulnerable individuals is my favorite definition of intimacy. Most of us understand the “unarmed’part of that equation without too much difficulty. But “vulnerable?” That’s tougher. Especially for men; toughness is associated with masculinity – vulnerability is something we’re taught to avoid.

Vulnerability is a paradox. A friend recently talked to me about how much closer he felt to the person he was dating after getting food poisoning while on a skiing trip. The experience of being cared for while he was weak (and not very attractive!) helped him to genuinely feel the loving words his boyfriend had been speaking for several weeks. He’s not eager to feel that sick again, but he recognized that amid the misery, he received an offering that was very intimate and loving.

If we are going to allow ourselves to open up and feel vulnerable, we need assurance that the person we are with will continue to respect us and will not abandon us. We need loyalty from the other person. In a healthy relationship, that means he’ll want a similar assurance from us as well.

Commitments aren’t all the same. Some commitments are lifelong pledges of fidelity, and that’s probably what most of us thing of first when we think of commitment. But a commitment may look quite differently. Ron tells Jeff he won’t date anyone else while they are going out. Mark and Ray agree that while they may have sex outside their relationship of several years, they will always put one another first. Jim and John agree not to discuss ending their relationship until they have given counseling a try. That’s a commitment, too.

It’s understandable that people often feel hesitant, even ambivalent, about making a commitment. Choosing one person means not choosing someone else. It can be hard to make that sort of choice – especially in a culture like ours, that values romance over commitment. Also, many of us have seen marriage commitments not taken very seriously.  Why would we be eager to do the same?

Making our commitments clear helps to make them powerful. Sitting down with your boyfriend or partner to talk about your spoken and unspoken understandings is important work within a relationship.  Some suggestions:

Remember that a commitment is much more likely to mean something if it is freely offered and not given because your partner feels intimidated.

Previous Post: How Boston has been celebrating LGBT pride for 45 years Next Post: Can You Ever Be Friends with Your Ex? Yes or No?