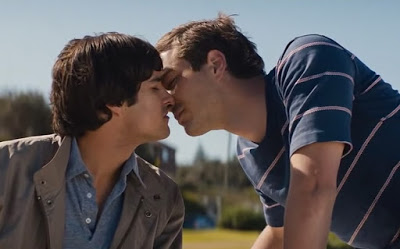 Strong, happy gay couples don’t phone it in — they make their relationship a priority.

Happy gay relationships don’t happen by accident. It takes two emotionally healthy, loving people who are committed to being the best partners they can be.
Below are some habits that will help create and maintain a happy and healthy twosome.

1. They always kiss their spouse hello and goodbye.

Far from being a meaningless habit, this ensures that you connect, even for just a moment, at least twice a day. Many people in unhappy relationships say that they can’t recall when they stopped kissing at greetings and goodbyes, it just slips away without effort. When you make the time to make eye contact with your partner and kiss them, it shows that you prioritize your relationship even during the busiest of mornings or evenings.

2. They are generous with compliments.

Everyone needs compliments and they especially need them from their partner. You cannot give too many sincere compliments ― whether you have been together 5 years or 50. It can be simple things like saying, ‘You look especially handsome today’ to deeply felt statements like ‘I was so proud of you today when you gave John such wise advice.’

3. They disagree at times, but they fight fair.

If partners don’t disagree now and then they’re either not being honest or aren’t human. Disagreeing isn’t a relationship problem ― it’s normal. It’s how couples work through their disagreements (or rather don’t) that can become bad for their relationship. Disagreements are opportunities to practice conflict resolution and build communication skills. Take a look at your disagreements and see what bad habits each partner has when you disagree. Do you talk over each other? Get angry? Yell? Swear? Name call? Disengage? Each partner should make a list of their bad tendencies and use future disagreements to practice responding differently and building better communication skills.

4. They don’t expect their partner to read their mind; they ask for what they need.

The happiest couples we see make it a habit to ask for what they need and listen to each other’s needs (without being resentful). Running around hoping another person will know what you need or that you are supposed to know exactly what they need is a recipe for disaster. The happiest gay couples are delighted to openly talk about needs and honor differences in needs without feeling like anyone should have already known or that their ‘soulmate’ will have the same needs as them.

5. They set aside time to reconnect and make it a priority.

They understand that in long-term gay relationships, affection and sex don’t just happen, gay couples need to have a commitment to cultivating connection instead of hoping it just happens. For example, at the beginning of a relationship, most gay couples can’t keep their hands off each other. Later on in a relationship, they can’t seem to keep their hands off their phones or computers. Gay couples who commit to prioritizing time to be together, to show affection and to keep learning and growing around sex, are definitely the happiest.

6. They laugh together ― often.

It’s easy for a relationship to deteriorate into just talking about logistics, saving your funny anecdotes for your best friend or coworker. This is a mistake. When gay couples get out of the habit of laughing together, their relationship is at risk of losing its joy and spirit.

7. They give each other the benefit of the doubt.

When people are struggling in relationships it’s not unusual to feel that your partner is on a completely different team that you. Remember that you are on the same team and that you both care about one another. Giving your partner the benefit of the doubt is a great strength in a happy relationship.
Have you found the right one, or are you still searching?

Previous Post: Gay Cop Whose Pride Proposal Went Viral Opens Up About The Dark Side Of Fame Next Post: Same-Sex Marriage Could be Coming to Australia Soon