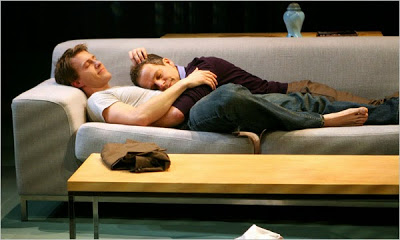 My partner and I just bought a house together. We are very excited about it and feel like it is a new exciting phase in our relationship. However, we can’t seem to agree on design choices for the house. Conversations about the subject lead to what seems like a competition over who has more free time to get projects done, and we both seem to think that the other wants to take over the house as our own. We’re acting like Alpha Males trying to mark territory and split it down the middle instead of thinking of it as a joint project and expression of our journey together. How can we get past these defensive feelings of entitlement and enjoy our new home together?

Dear Frank:
Congrats on your new home! What you’re experiencing is a very common and normal consequence of moving in with someone you care about and living together. “Merging” and “nesting” with your lover will most certainly bring up a host of issues that you’ll each need to address, such as privacy, allocation of household chores, relationship roles, and personal space, to just name a few. You each bring to the relationship different quirks/nuances and systems for doing things that will sometimes clash, and accommodating to each other’s habits and personal styles can be quite an adjustment indeed! Particularly if you’ve been single for any length of time, adapting to a new way of life in which considerations for another in your immediate living space need to be made can stir up quite a lot of defensiveness and resistance. You’ll be wanting to stake your turf and become territorial!
As men in this society, we’re socialized to compete and aggressively fight to win at all costs. We can have a strong need for control and independence. Put two men in a gay relationship together under the same roof, and all those primal masculine instincts get activated. While these traits may be beneficial in other parts of your life, it can cause significant distress in building an intimate relationship with your partner. While it’s not easy, communication and compromise are what’s needed most in situations such as this.
Communication will involve both of you having a chance to express your needs, expectations, feelings, and hopes with each other about living together in your new home. Acknowledge the pangs of difficulty you’re feeling and share them with each other using “I feel” statements. Stifle your need to defend your position and really listen to each other. It’s ok to get angry, but don’t let it get unproductive and call a Time-Out cooling-off period if needed. This is not about power and control now; it’s about teamwork and cooperation. Mirror each other’s preferences and concerns, empathize with each other’s feelings, and validate each other’s adjustments and uniquenesses as you approach this transition.
Compromise involves seeking win/win solutions to where you each sacrifice and gain in a balanced way to reach a common goal. Accept each other’s differences and that neither of you is right or wrong and develop the view that your home and the decisions made within it are “ours” and not a “yours and mine” mentality. Compromise means letting go of being in a power struggle and seeing each other as you are, not as you want each other to be. You cannot change or coerce your partner into doing anything, so learn to be there for each other in as supportive a way as possible.
Lighten things up with humor and when you find yourself “digging in your heels” on an issue, check your motives. Why won’t you budge? Is it really a genuine disgust of his decorating tastes, or are your defenses for control and independence kicking in? Any other reasons? Perhaps review with each other how your prior living arrangements in the past with others went—what worked and what didn’t? Identify the strengths that each of you bring to the table and see if you can channel these accordingly into your domestic life so there’s balance. Other possible solutions might include devising a system where you each divide the house by room regarding who’s in charge of decorating that particular space; agreeing to disagree; each of you only choosing items for the house that you both like—if one of you doesn’t like something, then it immediately is shelved no matter how much the other one likes it, etc.
Whatever compromising tactic you use, remember that it will require some give and take, listening will be key, and remember to remind yourself of the things that are going well in your relationship if your domestic struggles continue to “burn you up.” It’s also a good idea to check in with each other periodically to see if you’re still “on the same page” with decisions that have been made in the past as people’s needs, preferences, and expectations can change over time.
I wish you the best with your new adventure, Frank! Living together is a great way to learn about yourself and your lover, and it’s also a great way to learn how to resolve conflicts with each other. If handled with care, your relationship can become more intimate and fulfilling than ever before! Good luck!
Have you found the right one, or are you still searching?