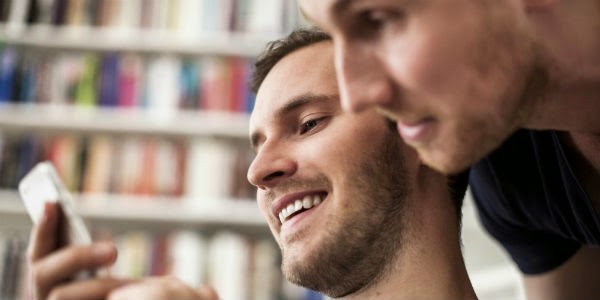 I’ve had Grindr on my phone for years – so long that I forgot what a day was like without it. I remember the first time I downloaded it; I saw neighbors online, torsos and all, and realized just how gay friendly my block really was. It’s weird to think how an app such as Grindr can affect one’s life, but in my case, it distracted me from everything I wanted.
I don’t mean to sound melodramatic. Actually, there are plenty of guys I know who have Grindr and are perfectly fine. Some dudes understand it’s just a gimmick, but for others it’s different. Not having it around has opened my eyes in numerous ways. For example, I see men rather than a sexual position; I see experiences rather than opportunities; and I have much more free time than I’ve ever had before. I’m beginning to feel like my old self again, but the funny thing is I didn’t even know he had gone away.
Looking back, I know I was addicted to Grindr. Say what you want and think what you may, there are countless of gay men out there who’ve been in my shoes. For men with little self-esteem, Grindr is an easy way to find some. Opening it up and seeing how many guys like you can validate your existence. I’m not sure why or how, but the hunt for casual sex filled up so much of my schedule that it eventually overpowered my priorities. Everything caved in on itself.
The hunt became a habit, which, after many years, became apart of my life. It was the first thing I did in the morning, it was the first thing I checked whenever I was in a new city, I kept refreshing it at work, while shopping, at the diner, and at night I was sending countless of messages to guys, hoping to find a hookup before bed. The level in which I took it was pretty unhealthy. I know because it began to affect my friendships.
Most of the time I was online, I never expected to find anyone. It was mental for me. The hunt was stronger than the need to get off, but when someone finally bit the bait as it were, almost nothing would stop me. I’d break plans with friends, cancel dates, forget to take the dog out, procrastinate work, etc. Whatever it was, sex was more important. Eventually my friends grew tired of it.
Grindr isn’t a bad thing, but I know there are some guys who take it to a whole other place. It’s not fun or convenient, but rather invasive and toxic. For men like myself with addictive personalities, finding something that validates your attractiveness or appeal is a high. We fight every time to find it and fill our need to be authenticated; it’s hard to let it go.
Since I deleted Grindr, I can’t even tell you how much time I have. I never thought I’d say this, but sex actually has a whole new meaning. It’s funny how intimacy becomes more important when there’s more work to achieve. Sex isn’t like ordering takeout any more, which has made it all the more special. The guys I’m dating have been genuine and sincere – so different from the horny goats you’d find on Grindr. I used to judge my entire community based on what I saw on my iPhone, now, I’ve realized there’s so much more out there. It might be dumb to say it, but deleting Grindr was one of the best things that’s ever happened to me.
Have you found the right one, or are you still searching?

Previous Post: 10 Surefire Ways To Completely Destroy A First Date To Top Next Post: Being Overweight In The Gay Community