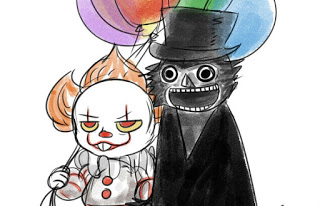 Twitter is losing its collective mind over the internet’s latest couple.

Pennywise from Stephen King’s “IT” and the Babadook ― two fictional and, ahem, jazzy characters from horror stories― have been reimagined as a duo.

The relationship between the two was imagined over the last few days on Twitter and Tumblr but the exact relationship start date is currently unknown. Pennywise has had a resurgence in popular culture thanks to the latest “IT” reboot. The Babadook, from the 2014 horror movie “The Babadook, was lauded as a gay icon back in June, so really it was probably only a matter of time before the world found him a terrifying boyfriend.

And, whether we like it or not, people realllllly love this couple and find them both to be LGBTQ icons.

Previous Post: These Two Gay Papas are Showing Why Gay Surrogacy is Beautiful Next Post: 6 Simple Dos and Don’ts of Online Gay Dating