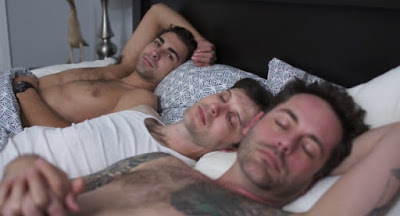 Who says you can’t have your cake and eat it too? In the gay dating world, an open relationship is fairly common, and for many couples it feels perfectly natural and entirely feasible. For others, the idea of knowing that your partner will be with someone else is totally unacceptable – emotional and physical intimacy are things that should only happen between two monogamous partners, and anything else is not a real committed relationship. An open relationship is a curious beast, and there are couples who have made it work, other couples who love the idea but find the reality to be vastly different, and other couples who seem to have made significant sacrifices in order to have an open relationship.


Having an open relationship can sound good on paper. I mean, a lot of gay men think, who wouldn’t want a fairly committed relationship and sex (as long as it’s safe) on the side?!
Unlike the free love and swinging days of the 60’s and 70’s, when key parties and sex clubs were the rage in both homo- and heterosexual circles, these days open arrangements are much more common in gay relationships. Still, I was never one for them, until an ex — we’ll call him Anthony — brought up the prospect. I was originally shocked at his suggestion, but then decided it was an empty threat, something I could go along with to appease him, but would never have to actually act on (kinda like saying you want to be an organ donor). And so I said, “Sure.” Here’s what I learned…


You Get to Be With Other People
Before we come onto anything else, it would be remiss not to mention the very simple fact that being in an open relationship means you get to be with other people and aren’t limited to just one person. This is of course the reason that many people get into an open relationship in the first place and it gives you a far greater amount of freedom. If you have ever been in a relationship and have looked at someone else who has caught your eye, then you will know that it can sometimes be frustrating not to be able to act on it. Even worse is when you’re out on your own and someone you are incredibly attracted to starts to chat you up and actually starts making moves on you… before you have to say ‘sorry I’m in a relationship’.
In an open relationship however you get to experience every opportunity that comes your way, you get to act on your desires and you never go home feeling that pang of regret.


More Varied Sex
One of the reasons that the previous point is so important is the sex. Plain and simple it means you get more varied and exciting sex and with more people.


You Don’t Miss Out
The other reason it’s so important though is that you won’t end up missing out on an opportunity that might have been ‘once in a life time’. You for instance won’t miss that opportunity to skinny dip with two guys in Switzerland – or to play strip poker with a sexy older guy, but more importantly you won’t miss out on meeting someone who might have been even better suited to you than your current partner.


It’s Casual
Being in an open relationship is by definition a casual affair and it means that you aren’t going to feel too tied down or pressured in any way. If you are someone who runs at the first sign of commitment then this might be for you, and if you are someone who isn’t ready to settle down, or who likes having a lot of time to themselves, then this can be a good way to achieve those things as well.


You Don’t Get Bored
That’s either of you. Because you are getting a more varied sex life and seeing more people, this means that when you’re with your partner you feel more excitement and more freshness. This can help to prevent things from settling into that ‘familiar’ territory and keep things exciting a lot longer.


Some Competition Can Be Healthy?
And the other reason for this is that your partner will be aware that you’re having other offers. Even if being in an open relationship was their idea, then you can bet that they are going to ‘up their game’ as it were to make sure that you’re still their favorite. And that means no jogging bottoms at home and exciting passionate sex.


There’s No Guilt (In Theory)
Even the most loyal partners among us have moments when our eyes wander, or when we start looking at pictures of other people on Facebook. This can be a source of guilt, but if you’re in an open relationship then there’s no guilt. Or at least there shouldn’t be. That is to say, that if you don’t feel guilty, you shouldn’t feel guilty about it.

Gay dating is an opportunity to go out and connect with whomever that you want. At some point, you may enter into an open relationship. We want you and your partner to review this article, and then decide what is best for your own relationship.

What do you think? Please leave comments below!

Previous Post: The Dos and Don’ts of Online Gay Dating Next Post: 10 Effective Tips to Stop Constant Fighting in a Relationship