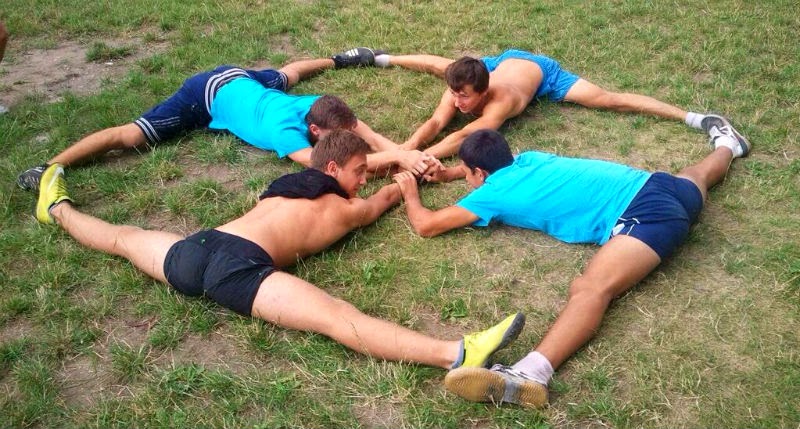 As queer people, we’ve all heard the term “power bottom.” Its usage implies a superior bottom who can enthusiastically handle any dick of any size at any time. A power bottom is a bottom’s final evolution—the Charizard of taking dick, if you will. They’ve learned their body and its limits, and as a result, they emit a holographic sense of confidence both inside and outside of the bedroom.

At least, that’s my interpretation of a power bottom. While the term is commonly used, its defining characteristics vary from gay to gay.

As both a homosexual and journalist, I’ve made it my responsibility to investigate this elusive identity within our community. My hunch? Like those who identify as “hung”, “open-minded,” or “6’2,”” a self-appointed power bottom…probably isn’t one. (No shade, of course. Gays can be a judgmental bunch, so embellishing Grindr profiles is as customary and expected as a resume. More on that later.)

To start, let’s check the internet’s most trusted resource for slang: Urban Dictionary, which defines a power bottom as “similar to a bottom, but a specific variety.” The website continues, “A power bottom tends to be in charge and feels most powerful when bottoming; the one who bottoms is the one on the ‘throne’ so to speak, ‘taking’ the top.”

Next, I consulted Dr. Joe Kort, a leading sexual therapist. Kort estimates that the term originated sometime in the ‘90s. “A power bottom is someone who knows what he wants and takes control of the penetration,” he tells NewNowNext. “He navigates the thrusting and dictates how hard the fucking will be.”

“Tops fuck bottoms, but power bottoms fuck tops,” Dan, 33, tells NewNowNext. This was verified by Tyler (@Gutter_Spice on Twitter), 30, who says, “What makes me a power bottom is that when I’m riding a guy, I grab him by the throat, spit in his face, and say ‘That’s my dick, little bitch.’”

Like Tyler, the gays I spoke to believe power bottoms exude “top energy.” Some popular characteristics are that they tend to be bossy, vocal, and “enthusiastic” about riding dick. In addition, gays believe a power bottom is always ‘prepared,’ will naturally assume the power bottom position (ass up high, back arched), and push back on the dick so that they’re in control.

“Even though [a top] is fucking you, [a power bottom] commands the thrusts,” Erich, 27, tells NewNowNext. “Confidence is also key. You need to be secure in your ability to take a dick, and that takes lots of practice.”

It appears that a power bottom is just a bottom who takes charge of sexual activity. But is it really that simple? On a surface level, the answer is yes, but taking on a dominant role in a position that is traditionally considered submissive is easier said than done.

Achieving power bottom status isn’t something that happens overnight. For tips, I reached out to one of the most talented bottoms I know: adult actor Dolf Dietrich, who recommends a power bottom-in-training start with toys when working your way up in cock size.

Dietrich says a power bottom always plans ahead for sex, which requires sacrifice. “When I have one of my no-holds-barred sex parties and power my way through 50 or more guys in one night, I don’t eat day-of and take a few Immodium before bed,” he admits.

Kort argues that power bottoms are similar to alpha tops and feels that they are less stigmatized than someone who identifies as bottom. “I feel like their scene is more masculine in some way,” he says.

Considering how dominance is often associated with masculinity, and submission with femininity, Kort’s observation could mean that power bottoms are viewed as more desirable because they’re more “manly.” As such, many may identify as power bottoms to stand out on the Grindr grid. Of course, attaching innate desirability to a positional preference based on how masculine it is stems from sexism. But acknowledging that core prejudice doesn’t mean the phenomenon isn’t real.

At the end of the day, a “power bottom” is simply someone who is the best and bossiest at what they do: taking dick. While the term is probably used a little too liberally, it is no doubt a symptom of bottoms being condemned for straying from sexist, heteronormative concepts of masculinity. Power bottoms challenge this notion by actively demonstrating that bottoms don’t have to be submissive. And for that, power bottoms, we thank you.

Previous Post: 12 Best Hobbies For Gay Couples That Can Strengthen Your Relationship Next Post: Netflix Rolls Out Official Trailer for the Adaptation of Gay Classic ‘The Boys in the Band’ — WATCH